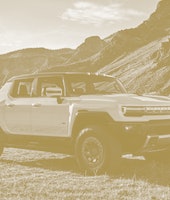 There are plenty of buzzy electric vehicles coming to the market these days, but GMC’s new lineup of Hummers is creating a hype uniquely its own. Something about being able to drive that monstrous silhouette without sacrificing the planet itself to do so — it’s irresistible to many. So irresistible that current electric Hummer owners are re-selling the pickups for more than twice their MSRP.

GMC’s Hummer officially started shipping back in November, but an entire year’s worth of the vehicles had already sold out by the time they started rolling off the lot. That’s particularly impressive given that it goes for $112,000.

It turns out snagging one at that price is actually kind of a steal, these days. Not one but two electric Hummers sold at an auction in Texas for $250,000 this week (h/t Electrek). A third vehicle sold for $260,420 at an online auction. (Whether or not the 420 is meaningful in this case is beyond us.)

All aboard the hype truck — The all-electric Hummer has been turning heads since late 2020 when GMC first announced that it would be rebooting the cult classic. And it’s only continued garnering hype ever since.

GMC’s Hummer is, like its predecessors, a real beast of a vehicle, with about 329 miles to a single charge and the ability to tow up to 7,500 pounds. It’s also got the Hummer name going for it. That alone carries hype.

GMC says it’s ended up with more than 65,000 reservations for the all-electric Hummer, but only 99 actually went out to customers during the first quarter of the year. Add hype to the supply problem and you have a classic recipe for sky-high resale prices.

Competition abounds — While Tesla does still sell most of the fully electric vehicles in the world, its hold on the overall market is looking less steady by the day. Where Tesla’s most-hyped vehicles never arrive on time and generally feel like vaporware (looking at you, Cybertruck) competitors are getting consumers pumped for their own EVs and actually delivering them.

Ford’s F-150 Lightning is a great example here. Like the Hummer, it’s a classic truck beloved by many Americans — and its breakout success is tapping into an entirely different EV audience. Rivian’s R1T pickup is capitalizing on similar factors. Add the Hummer to that mix and the Cybertruck can all but be forgotten.

If you don’t have $250K lying around to snag one of those 99 E1 Hummers, there are a few other models on the horizon (as long as you don’t mind waiting a hot sec). There’s the Hummer SUV, which will launch at a similarly eye-popping price of $110K; the less-powerful Hummer EV 3X is expected later this year at $100K; the EV 2X and EV 2 will follow in subsequent years for $90K and $80K respectively.