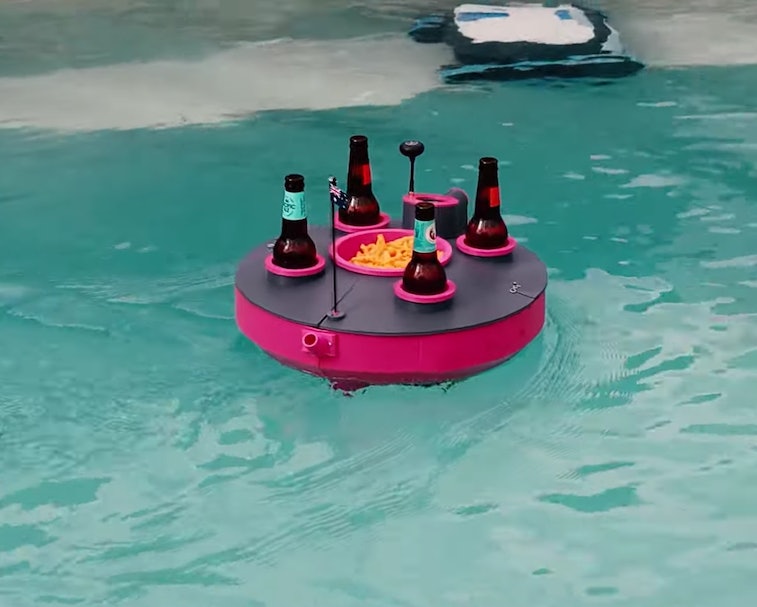 We got a couple months’ left of swimming pool lounging, and we are trying to make the most of it, damnit. Apparently, so are the folks behind the Electrosync YouTube channel, who designed and built a suspiciously simple, badass remote-controlled beer barge complete with snack bowl, water cannon, Bluetooth speaker, and even a cute lil’ Jolly Roger flag that can be raised and lowered from afar.

To make a lazy pool-goer’s dream come true, a plastic shell was rendered then 3D-printed on Creality CR-10 and Ender 3 Pro 3D printers, then covered with a polyester resin to make the entire vehicle buoyant. The innards installed include a couple RC motors, brushless propellors, and the aforementioned accessories to give the whole thing some pizzazz. Check out the video below to see the lil’ guy in action:

Look at that sucker go! As the video’s narrator notes, it’s currently the dead of winter for Australians, so we’d be happy to put their creation to good use for a few months over here until things start warming up among the Aussies.

Not the only boat project from Electrosync — This isn’t the first 3D-printed nautical experiment from the Electrosync channel. Almost a year back, they managed to design and construct a massive “utility boat” for a variety of uses, including measuring and sampling an area’s water quality. Then there was a strange, somewhat ingenious idea to convert a Roomba into a damn pool cleaner, which makes much more sense once you see it in action.