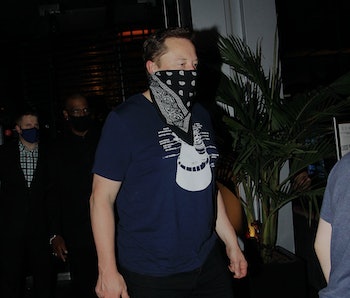 Bill Gates has been de-throned as the second-richest person in the world by none other than noted cool dad Elon Musk. A huge bump in Tesla’s stock price yesterday sent Musk’s net worth soaring to $127.9 billion — officially making him second only to Amazon CEO Jeff Bezos in the line for the guillotine, according to Bloomberg’s Billionaires Index.

Musk has Tesla to thank for his latest wealth jump. Tesla has been doing incredulously well amidst the continued COVID-19 pandemic, with its market value now close to $500 billion. Nearly three-quarters of Musk’s wealth comes from his majority ownership of Tesla.

This is actually the second time in as many weeks that Musk has jumped the wealth charts — he beat out Facebook’s Mark Zuckerberg just last week to become the third-richest person in the world. His worth has grown another $7.2 billion since then, pushing him into the number-two spot.

Elon Musk’s various business ventures over the years have been polarizing, to say the least, but Tesla has by far proven his most successful creation. Now if only we could get him to redistribute some of that cash.

Tesla knows what’s up — Tesla wasn’t actually founded by Musk, contrary to popular belief, but he did join the company soon after its creation in 2003. He’s been the CEO of the company since 2008 and has therefore led its utopic vision for the majority of its lifespan.

With concerns over climate change at an all-time high (and still growing), Tesla’s promise of sleek, all-electric vehicles is more tempting than ever for consumers. Earlier this year that promise made Tesla the most valuable automaker in the world — and the company hasn’t stopped since.

Questionable practices — Tesla’s prowess — and therefore Musk’s immense riches — have not been built on genuine care for humanity. More often than not, Musk’s future-forward visions are marred somewhat by the business practices he uses to make them a reality.

This has been no more clear than during the COVID-19 pandemic. Musk, ever ruthless in his pursuit of market domination, kept Tesla’s factories open directly against stay-at-home orders from government officials. He said he’d rather get arrested for doing so than keep Tesla’s operations closed.

Musk then forced Gigafactory workers back to the factory floor after a brief respite, despite still-rising COVID-19 cases. He decided, overall, that his workers’ lives (and those of their families) were of less concern than Tesla missing production targets due to extended closures.

Elon Musk’s net worth has risen more than $100 billion this year. He has pocketed so much money this year you couldn’t count it if you tried — while the vast majority of the U.S. has struggled to pay rent and bills all year.