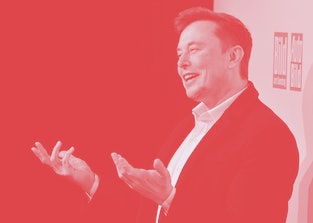 If you ever want to see a CEO endanger his very own enterprise, consider studying Elon Musk's case. Last week ago, Musk suggested on Twitter that the "Tesla stock price is too high [in my opinion]." And it didn't take very long for that comment to manifest in eyebrow-raising chaos as the share price plummeted by a stunning 10 percent.

Yet in spite of the self-sabotage he routinely displays online — from making crass comments about rescuers to peddling unsubstantiated remarks about COVID-19 — Musk is nonetheless in line for a whopping $700 million payday, according to Reuters. It sounds insane but that's the recurring theme for Musk's life (who also just became a father).

Breaking down the numbers — The Reuters' report is based on Refinitiv data and the numbers claim the following:

In other words, in spite of temporarily wiping out billions of dollars from Tesla's market value (the stock bounced back the following day), Musk appears to be doing pretty well for himself. It's stunning that investors continue to look past the man's antics online.

A history of madness — Small, forgettable verbal gaffes are not Musk's thing. When he loses it, he truly loses it. Over the past few weeks alone, Musk has lost his composure over the COVID-19 official response. In one particularly unhinged lockdown-related example, he said, "I think people are going to be very angry about this, and are very angry. If somebody wants to stay in their house, that's great, they should be allowed to stay in their house, and they should not be compelled to leave.

"But to say they cannot leave their house," he added, "and they'll be arrested if they do, this is fascist. This is not democratic, this is not freedom. Give people back their goddamn freedom."

In another equally odd instance, Musk first downplayed the severity of the pandemic, then followed it up with a promise to provide ventilators to some hospitals in California. Those machines never arrived, according to officials. Plus, his company has laid-off at least 280 janitors and bus drivers in the middle of a deadly pandemic. It's bananas, even for Musk, that none of these outbursts or other off-putting peculiarities have put a dent in his (financial) shine — at least, not yet.