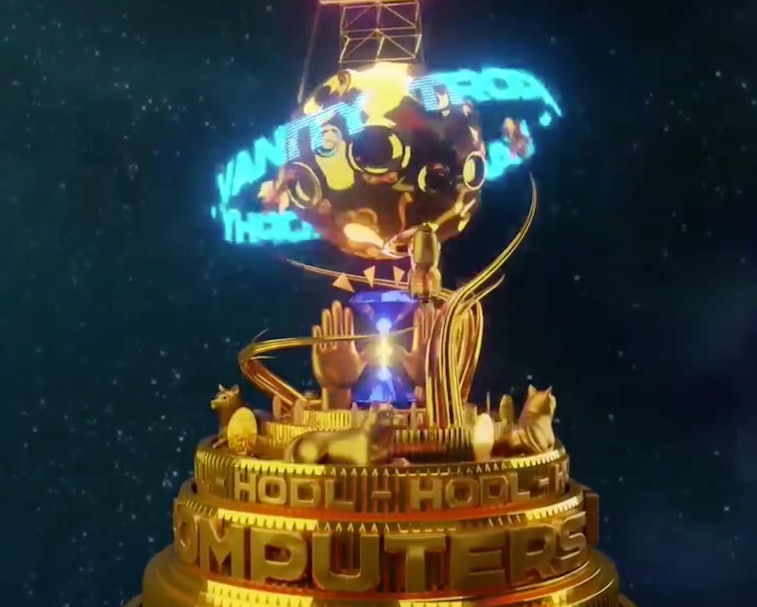 Elon Musk says he is selling a cringy song about NFTs — or non-fungible tokens — as an NFT. The song was shared on Twitter today along with an accompanying video that shows a “vanity trophy” rotating in circles and emblazoned with references to cryptocurrency, a recent side hustle for Musk, who until recently was the world’s richest person.

What’s an NFT? — In layperson’s terms, an NFT is a certificate of authenticity for digital artwork. The original creator can upload their work — be it a photo, a song, or another digital artifact — to a blockchain, where it’s signed with a unique key and its ownership is tracked as it trades hands. The idea is that by creating “unique” pieces, artists can make money in the digital sphere by creating scarcity where files have traditionally been thought of as infinitely replicable. Only one lucky (or mad, depending on your perspective) person will be able to say they own Musk’s NFT song about NFTs.

The song itself — which isn’t Musk’s first foray into music — isn’t particularly good. It starts with the term “NFT” repeated over and over again before a female singer comes in with the lyrics, “NFT for your vanity, computers never sleep, it’s verified, it’s guaranteed.” But the song is being sold by Musk himself, so does it really matter how good it is? As for the accompanying imagery, it’s a clip of the 3D golden trophy with the words “computers” and “HODL” (an anagram for “hold on for dear life” which is a rallying cry for bitcoin fans) around the base, revolving golden cats and coins, a pair of emoji-like raised lands on either side of an hourglass made out of a pair of diamonds, and an orb (possibly the moon, possibly the coronavirus) with the words “vanity” and “trophy” spinning around it.

It’s crypto, bro — Tesla recently purchased $1.5 billion worth of bitcoin, and the price has since skyrocketed to nearly $60,000. And Musk previously tweeted about altcoin, Dogecoin, sending the price climbing precipitously in the process. NFTs were sort of the next logical step.

The announcement of Musk’s foray into crypto art comes the same day he gave himself a new title at Tesla as “Technoking,” according to a Securities and Exchange Commission filing, while company CFO, Zach Kirkhorn, is now “Master of Coin.” Musk will continue to hold the title of CEO simultaneously.

Easy money — It’s hard to tell whether this move by Musk is merely another in his long line of dad-joke-like PR moves, or whether he’s actually in it for the money. Musk has reportedly made millions of dollars off his side projects, from “S3XY”-branded Tesla shorts to flamethrowers, and branded tequila.

Considering other major NFT sales, there’s no doubt that Musk’s digital collectible will bring in a pretty penny, and for relatively little effort on his part. It’s been speculated that Tesla bought its bitcoin holdings as a hedge against possible inflation — and the company’s endorsement may be one of the factors bolstering the cryptocurrency’s price.

Future potential — There’s been something of an explosion in excitement over NFTs in recent months, with a record-setting piece sold at auction for $69 million just last week. Musician Grimes, who is also Musk’s romantic partner and mother to his youngest child, recently sold an assortment of NFT images and short videos for more than $6 million. Twitter CEO Jack Dorsey has said he will sell his first-ever tweet as an NFT. And rapper Azealia Banks even sold an audio sex tape for $17,000 (yes, really).

While most of these notable sales are being made by major names, there’s hope that NFTs could someday provide a sustainable income stream for smaller creators. The technology typically includes the ability to collect royalties every time a piece is re-sold so that as artworks trade hands and increase in value, the proceeds don’t just go to wealthy collectors. It’s all still quite speculative, however, and it’s yet to be seen whether NFTs will actually see widespread acceptance. Of course, they said the same thing about bitcoin five years ago.