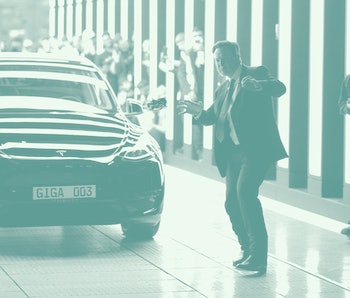 The only thing surprising about Elon Musk getting his ass sued for brazenly ignoring a regulatory deadline last month to disclose his 9 percent stake in Twitter is that it took even this long to get said ass sued — but sued it has gotten. As the Associated Press announced earlier today, a new legal challenge in New York accuses the Technoking of intentionally withholding news of his purchases in order to continue buying up Twitter stock at lower prices. Musk first snagged a little over 670,000 shares in Twitter on January 31 at $36.83 a piece, then continued buying up stock nearly daily through April 1 when he finally told everyone about his machinations.

According to federal law, Musk was supposedly required to inform fellow shareholders within two weeks of surpassing a 5 percent stake in the company — a milestone that occurred back on March 14. Musk, however, only got around to telling everyone of his new financial interest in the social media platform a full 11 days past the legal deadline, at which point he already amassed his roughly 9 percent influence in the company. You may find this difficult to believe, but investors did not take kindly to the delayed information, and would like a legal word with Mr. Musk.

Making traction with a class action — Although the current lawsuit only pertains to one investor named Marc Bain Rasella, it’s already clear that the intention is to seek a much wider scope for legal recourse. As the AP reports, the end goal here is to certify this suit as a class action issue, which would allow a helluva lot more pissed off Twitter investors to seek damages from Musk. Of course, such a project will take much longer to organize — perhaps even as much as a year or more.

Only the beginning — It’s worth noting here that this new lawsuit is between individual investors; the federal government’s response is an entirely different beast. Musk has been waging his only ridiculous battles with the Securities and Exchange Commission for years, but this latest business stunt will only add fuel to the fire. It’s hard to argue that Musk didn’t illegally go about his (failed) attempt to buy his way onto Twitter’s board of directors. The SEC is more aware of this than anyone else, and rest assured, they’ll be taking the Technoking to task for it soon enough.