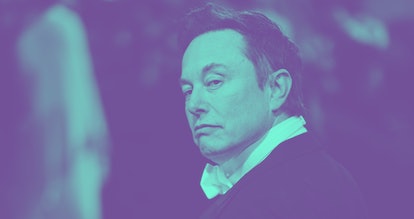 It’s become very evident over the past few weeks that Elon Musk, prophet of finance and workplace champion, is having serious second thoughts on the idea of paying roughly $44 billion to acquire Twitter. Although his reasons for this are largely unclear (perhaps he realized just how little money there is in the project) he has publicly latched onto the idea that the social media platform’s bot issue is both underestimated and out-of-control, and requires serious scrutiny before actually moving any further along with his hostile takeover.

Try as he might, however, he’s pretty much legally locked into moving forward with the purchase at $54.20 a share... unless he’s cool with paying a $1 billion fee. Still, his lawyers continue their search for some kind of loophole or plausible argument to either back out or renegotiate terms, as evidenced by a new, pretty desperate-sounding letter filed with the SEC earlier this morning addressed to Twitter’s chief legal officer.

On his own terms — In the notice, Musk claims Twitter is continuing to stonewall his attempts at learning more about the platform’s spam issues, thus preventing him from getting an accurate picture of the company’s state of affairs. Although Twitter estimates (based on internal metrics) that roughly 5 percent of its accounts are bots at any given time, Musk has publicly surmised the figure is as much as 20 percent, although he hasn’t cited his methodology on that dramatic difference.

According to the SEC letter, the Technoking is upset that his potential acquisition hasn’t been more forthcoming with its data and measuring parameters:

Possible end goals — As business reporter, Alex Weprin, notes, Musk is likely hoping for one of two possible end goals — either A) a legal battle to somehow negotiate a lower buyout price, or B) a wholesale retreat from the acquisition. It’s still unclear exactly how all this will play out, but one thing is for sure: Elon is definitely in a bind. Perhaps he should try offering Twitter execs a horse for their troubles?