“If there are tweets that are wrong and bad, those should be either deleted or made invisible.” 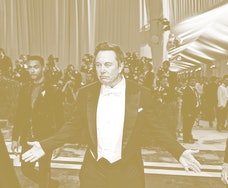 Elon Musk already has a long list of plans for Twitter, despite not actually owning the company yet. One of his big ideas is un-banning Donald J. Trump from the platform — a plan so unsurprising it barely elicited a sigh of exasperation from the Input team’s Slack. Musk is all about “free speech,” after all.

“Permanent bans should be extremely rare and really reserved for accounts that are bots, or scam, spam accounts,” Musk said in a keynote interview for a Financial Times conference. “I think that was a mistake, because it alienated a large part of the country and did not ultimately result in Donald Trump not having a voice.”

Can you hear our eyes rolling back in our heads from there?

But it did work lol — For starters, Musk’s statement is entirely inaccurate. Twitter was Trump’s number-one megaphone during his presidency; since his banning, conversations about him dropped sharply. Without Twitter, Trump’s online relevance faded to naught.

Trump has been trying every possible avenue to get his voice back ever since the ban. First he tried creating a blog of sorts that no one read; it shut down less than a month after its launch. He even went as far as to create his own social network, Truth Social. He actually just joined that one himself this past week. Thus far he’s posted 51 “Truths,” and the messages that receive most engagement focus on — you guessed it — Twitter.

Unbanning everyone…? — As is the case with many of Musk’s promises, his statements on unbanning Trump don’t exactly come across as well-thought-out. Because Musk isn’t just saying he thinks Trump shouldn’t be banned — he’s stating that, more largely, he believes only bots and scam accounts should be banned.

This idea opens a much larger can of worms, one that Musk may or may not have thought about before his keynote interview. Because if Musk believes that only bots and spam accounts should be perma-banned (and believes that the retroactively lifting bans is proper rectification), that should mean he’s ready to un-ban everyone else kicked off Twitter for hate speech, misinformation, inciting violence, etc.

Perhaps we can look forward to legions of Twitter zombies in the coming months?

Will he want to come back? — It’s unclear whether or not Trump would actually take his megaphone back if given the chance. Trump has specifically said he won’t go back to Twitter, and he has just gotten Truth Social up and running. His desire to appear loyal to his own company may outweigh the desire he feels for his old soapbox.

Or maybe Trump will come back, rally his most trusted cronies, and use that soapbox to run for office again in 2024. Who knows!

Of course, Musk won’t be able to un-ban anyone until he actually owns Twitter. At the time of this writing, at least, his leadership is still purely theoretical.