Elon Musk wants to break up Amazon over anti-lockdown propaganda 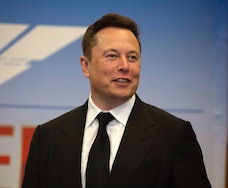 On Thursday, Grimes’ mother allowed Elon Musk to tweet again. After former New York Times reporter Alex Berenson drew attention to Amazon’s removal of his e-book downplaying the severity of COVID-19, Musk lashed out about the e-commerce giant on Twitter. Musk and Amazon CEO Jeff Bezos might have being space bros and billionaires in common, but that doesn't mean they have to see eye to eye on everything.

Don’t make us defend Jeff Bezos — Berenson’s e-book, which was reinstated after what Amazon now claims as an error, supports his increasingly conservative talking points about the overstated risks of SARS-COV-2. Musk’s support of the booklet is unsurprising given the billionaire’s similar criticisms of the lockdowns’ effect on the economy, particularly Tesla’s chunk of it.

The 22-page e-book is unfortunately only part one of a series (!) and focuses on mortality rates as well as the predictive models for them. Immediately, Berenson almost seems disappointed that high-end mortality projections for the year were far from being met at the time of writing. In March, the consensus from experts for estimated U.S. deaths was 200,000, with a likely range of 19,000 and 1.2 million. The current U.S. death toll for COVID-19 a mere three months later is approximately 108,000.

Bezos is quiet, as usual — Bezos, in classic Bezos fashion, has sensibly opted not to respond. But then, he never does. Again, disinclined as we are to defend him, Bezos at least has the common sense to keep his opinions to himself, and off of social media.

With Amazon desperately trying to quash COVID-19 misinformation and fake cures, it easy to see why the e-book was flagged. If anything, Musk making a stink on Twitter has driven more people to Berenson’s dangerous reporting — which has already made a 74-year-old diabetic less afraid of dying from the disease. Twenty percent of critically ill COVID-19 patients in intensive care units have diabetes. While living in fear is damaging to one’s mental health, living without caution could be lethal for many flocking to this information.