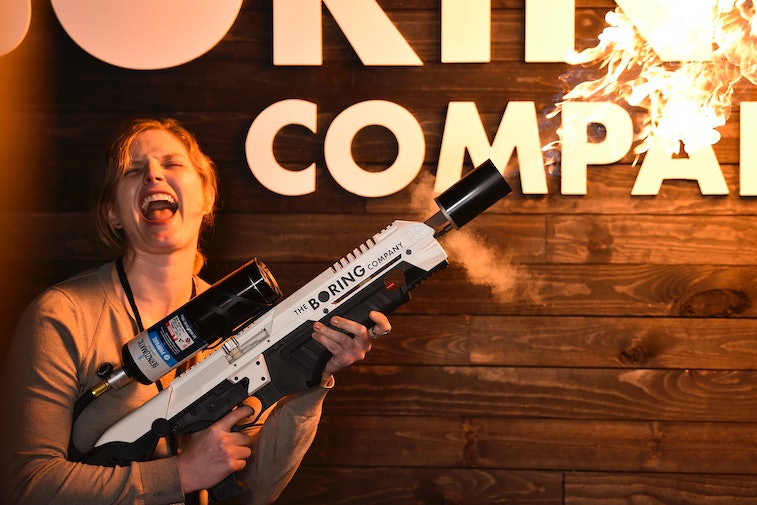 A couple of years back, Elon Musk released a limited-run gag product in conjunction with his underground transit tunnel project, the Boring Company: a $500 flamethrower called "Not-a-Flamethrower." It was a very dangerous, very dumb idea that sold 20,000 units. A lot has happened involving Musk and his tech-bro empire since then, which we are too exhausted to recount in its entirety, but let's just say that, somehow, "Not-a-Flamethrower" was one of least terrible choices he's made lately.

And yet, according to a lengthy report yesterday by TechCrunch, both U.S. and Canadian law enforcement agents have confiscated Not-a-Flamethrowers in at least three separate drug and weapons seizures since 2018. Most recently, Canadian police found one of Musk's "toys" alongside 11 other weapons and a compound bow earlier this month during a drug bust.

A lot of people agree it's a stupid idea — Would it surprise you to learn that many other countries are super pissed off about people toting around Not-A-Flamethrowers? As TechCrunch also notes, the reality TV star, Max Craddock, found himself in an Italian jail cell for a week back in 2018 for trying to take his portable fire weapon onto a public bus (in Italy, possession of such a device could carry up to a decade in prison).

Hell, even Musk himself has admitted his Not-A-Flamethrower was a terrible, awful, childish idea. "It's dangerous, it's wrong. Don't buy it. Still, people bought it. I just couldn't stop them," he said on The Joe Rogan Experience not long after the device's release, because that's how the free market he loves so much works.

As obvious as it is stupid — Technically speaking, Not-A-Flamethrower lives up to its name, since it is essentially "just" a glorified, propane-fueled roofing torch. Still... come the hell on. Yes, we all know flamethrowers are pretty dope, all things considered, but that doesn't mean we should market them as ostentatious gag gifts for the uber-wealthy.

We'd love for Musk to face some kind of comeuppance for promoting such an inane product, but seeing as how he recently became Bezos' chief competitor for "wealthiest man in the world," we're not holding our breaths here. In all likelihood, we'll continue to see Not-A-Flamethrowers showing up in future law enforcement busts for a while. Not because people are actually out there using them on the streets, but just because the types of people pretending to be drug kingpins are exactly the demographic to buy one.