Embrace eco-collapse by converting your Ford F-250 into a giant, diesel Bronco 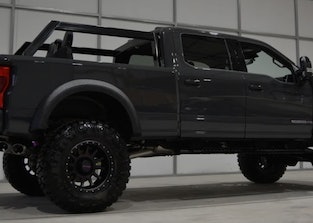 The amount of glacial loss projected for Mount Everest by the year 2050.

Major overhauling of the transportation industry is needed to help stave off the most catastrophic effects of climate disruption, but it’s still cool to see companies like Ford making some big steps forward with its Mustang Mach-E, as well as the hotly anticipated F-150 Lightning...

That’s just one climate change-covering writer’s opinion, though. It’s important to take into consideration opposing viewpoints and strategies — so why not weigh the pros and cons of, say, deciding to take the road less sensibly traveled via a diesel-fueled F-250 converted into a roided-out Bronco homage that can’t possibly get more than 5-miles to the gallon?

Meet the MegaBronc — The monstrosity you see above is an example of the MegaBronc, an upcoming conversion kit for the Ford F-250 Super Duty Lariat that features, among other obscenities, 40-inch tires, a third seating row to facilitate a total of 7 passengers, a 6.7-liter turbodiesel engine, and an increased truck width of 88 inches across. Aesthetic tweakings mimic Ford’s recent Bronco rerelease, and give the whole project a weird, mutational look. Check out some more angles of the behemoth below.

Bigger issues than bigger trucks — Will buying one of these MegaBronc conversion kits doom the world to a hellish desert wasteland? No, of course not. But it’s hard to look at these kinds of Big Boy Toys and not see them as a metaphor for the larger cultural issues of personal enjoyment over communal health, materialistic excess, and wholesale ignoring of the bigger problems at hand. While a price point isn’t listed yet, MegaRexx’s previous (somehow even more massive) MegaRaptor conversion kit set buyers back around $169,000, so it’s safe to say the MegaBronc will fall somewhere within that range.

If someone is willing to spend that much on a big-ass, ostentatious vehicle, they might as well pony up for one of the upcoming EV Hummers instead.