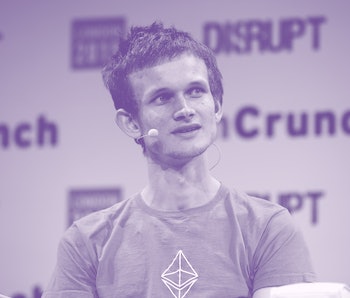 Vitalik Buterin, the 27-year-old creator of the popular Ethereum cryptocurrency platform, donated more than $1 billion to nonprofits in India to fight the country’s surge of COVID-19 infections. Buterin made some of his donation in Ether, a relatively stable cryptocurrency. But he pulled something of a wild card by making some of his donations in a meme currency called Shiba Inu coin.

The Shiba Inu coin — sometimes called the Shiba Token or simply SHIB — is an experimental cryptocurrency that was started as something of a joke, much like Elon Musk's favorite, Dogecoin. Buterin was reportedly gifted a hefty amount of SHIB at some point in the past and decided to donate about $1 billion of it to COVID-19 relief in India.

The problem, of course, is that Shiba Token is extremely volatile; so much so, in fact, that the disclosure of Buterin’s donation tanked the currency’s price point. Right now one SHIB is worth $0.00002028; on Monday it had risen as high as $0.0038. This means Buterin’s donation is already worth way less than $1 billion.

Meme currencies can be fun to play around with, but as a meaningful donation... not so much.

Thanks and also no thanks — Let’s get this out of the way first: Buterin’s donations will be used by the India COVID-Crypto Relief Fund to send much-needed supplies to hospitals in the country. That’s enormously philanthropic. Buterin’s Ether donation, in particular, is somewhat stable, and the Relief Fund will be able to liquidate it easily enough.

But the catch here is a big one. As soon as Buterin disclosed his donation, the SHIB market went buck wild. That $1 billion in SHIB is worth closer to $500 million now — a sizeable sum, but one with a high probability of continuing to lose value over time.

Those running the Relief Fund can’t even liquidate the alt-coin all at once for fear of further tanking the rest of the SHIB market, which currently has an $8 billion cap. The Fund tweeted yesterday that it plans to complete a “thoughtful liquidation” over time.

Uncharted philanthropy — Even the most stable of cryptocurrencies is volatile, something investors are forced to reckon with every day. All it takes is one tweet from Elon Musk to send the bitcoin price into a tailspin, as it did yesterday.

Now that many of the world’s richest people have made their fortunes with cryptocurrency, this is an issue we’re going to keep running into — and with increasing frequency, as cryptocurrency finds more mainstream appeal. If Buterin’s philanthropy spree proves anything, it’s that we still have a long way to go in our preparations for crypto to be used in all corners of our lives.