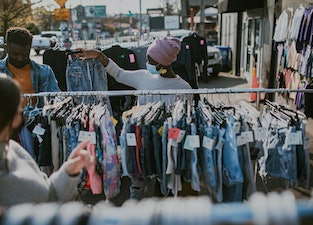 Etsy, the e-commerce site for hand-made and vintage goods, is purchasing fashion resale marketplace Depop for $1.63 billion. The acquisition is perfect for Etsy, really — Depop has a similar operating model but with a much younger audience.

Josh Silverman, CEO of Etsy, said in a statement that he’s “thrilled” to bring Depop into the Etsy empire. “Depop is a vibrant, two-sided marketplace with a passionate community, a highly-differentiated offering of unique items, and we believe significant potential to further scale,” he said.

In his statement, Silverman calls Depop the “resale home for Gen Z consumers,” and this, really, is the crux of the value Etsy will get out of the Depop buyout. That’s not to say younger generations don’t already use Etsy (they do!) — but Depop is positively swarming with Gen Z and teenagers. That kind of captive audience is priceless.

A fashion empire — Depop has only been around for ten years now, but in that time it’s managed to build a huge community around fashion resale. The company, which is based in London, now boasts more than 26 million users from 147 countries. And 90 percent of the Depop community is under the age of 26.

The youngest internet users are, for the most part, the most conscious about the consequences of their shopping habits. Thrifting is more popular than ever as a result — and Depop is basically the largest online thrift store in existence.

Depop makes it incredibly easy to sell worn goods and handmade clothing; of course it’s a hit with the always-on-the-lookout-for-entrepreneurship-opportunities Gen Z crowd. It’s good for the environment and their wallets. Gen Z’s also popularized the “haul” video where shoppers show off their thrift finds — yet another way Depop effortlessly fits into that equation.

Clean your own house first — Both Depop and Etsy have seen their fare share of criticism in the last few years. Depop is for the most part unproblematic, though some have raised concerns about the app’s part in gentrifying the secondhand clothing market.

Etsy, on the other hand, has had some intense moderation issues in the recent past. The company took a hard stance against QAnon merch late last year, but an investigation just last month showed Etsy is allowing the sale of all kinds of illegal goods — everything from poisonous plants to deadly weapons. The company is investing $40 million to overhaul its moderation staff and moderation AI tools this year.

As two of the biggest marketplaces for handmade and vintage goods, Etsy and Depop are really made for each other. Etsy hasn’t mentioned how (or if) it plans to fold the Depop team into its own; hopefully in doing so Etsy is able to keep Depop’s rapt community intact.