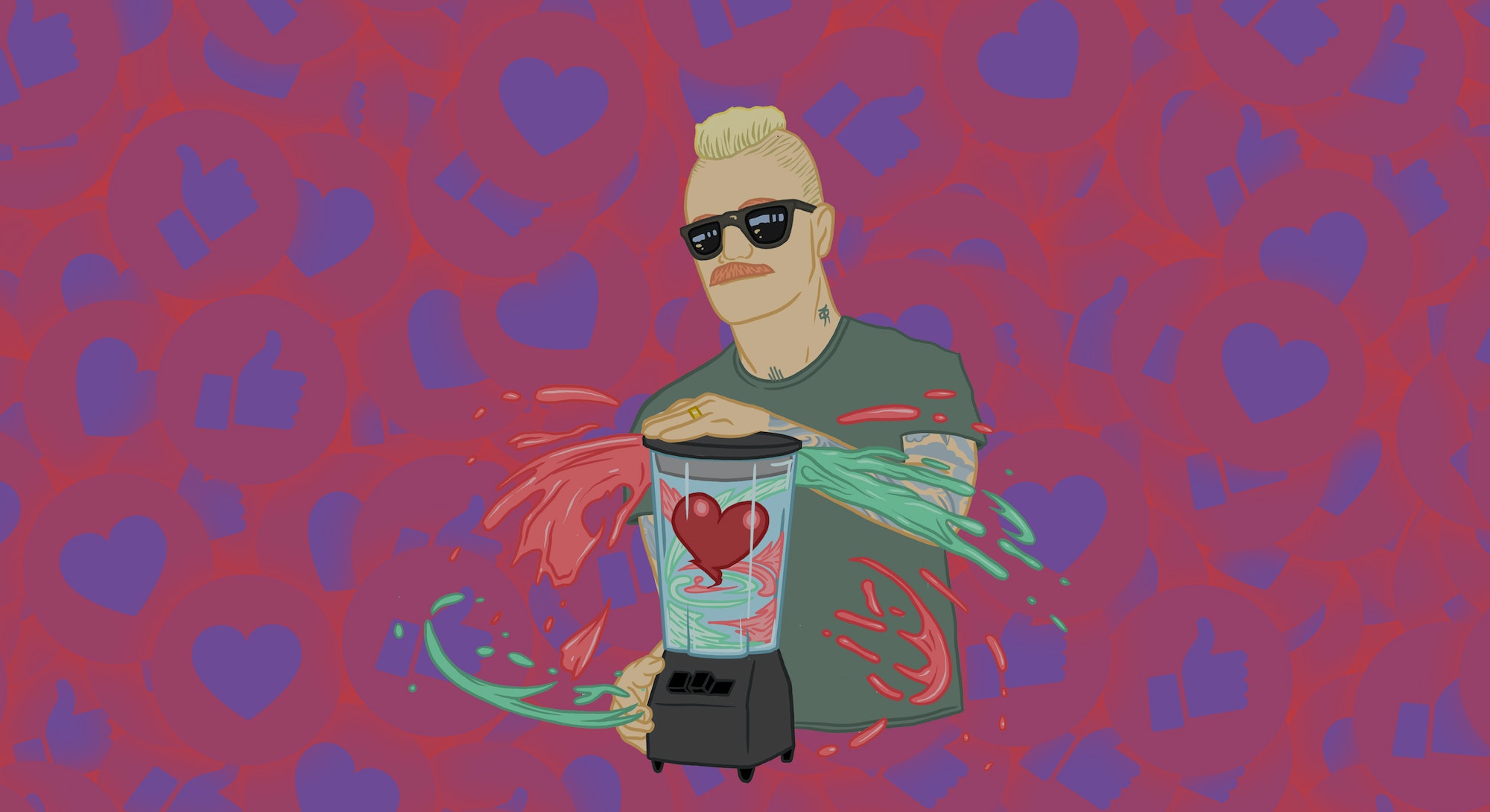 Hello, I’m the Eve 6 Guy, aka the Heart in a Blender Guy. If you know who I am, you’re either way too online or have questionable taste in music — perhaps both.

No matter what, you’re probably wondering why in shit Input gave me an advice column. Well, it’s because I asked them to, and Mark, the editor, is a nice guy who has a hard time letting people down. I hope he writes in and asks me for some advice on how he can improve in that area.

All joking aside, I’m doing this because I think I’m pretty good at it. Giving advice that is. (I’m not always good at taking it.) I like getting into the shit. The real problems of living. I like helping people when I can, and I’ve been similarly helped by others. I’m 15 years sober. I’ve been chewed up and spit out by the machine. And I’ve managed to reinvent myself and create my own avant-garde world out of the smoking garbage heap of mediocrity.

I think I’m qualified, but I guess I’ll let you decide. Here’s the first question.

Ghosted by a ‘good’ guy

He and I matched on a dating app — our messages were cheeky and sweet and fun, and he checked all the boxes. We had our first date, and it was perfect. We had drinks and food and laughed about performing magic tricks for each other the next time we hung out.

On our next date, we did just that: We got silly with some sleight-of-hand tricks. We laughed some more and flirted over sushi. He was so cute, and I liked him a lot.

We texted nonstop, then had another date. He was just as cute, fun, and adorable. Then we boned.

After that? Dead silence. He ghosted me. (Nothing was weird about the sex, at least from my perspective.)

Any other guy, I’d just let it go. But here’s the thing: This motherfucker is a goddamn hero in my town. He paints wood cutouts of animals and different characters and leaves them around town for treasure hunts. It’s adorable, and he puts himself and his cutesy little pieces out there for the right reasons. It’s not surprising everyone loves him and the wholesome vibe he shares.

But in my opinion, this local artsy hero love-bombed me till he achieved his conquest, then ghosted. I want to screech about it every time my town’s subreddit gives him a circle jerk and praises him like he’s Mister Rogers. How do I stop being so annoyed that people love this guy so much every time I see him getting praised?

Yeah, it seems like what makes this ghosting particularly obnoxious is the stark contrast between the way he presents to the world and his behavior with you. He gets to enjoy this virtuous reputation but you know better.

Hypocrisy is deep. I’m reading a book about hypocrisy right now, The Red and the Black by Stendhal, and it’s helped me to put some resentments of mine in perspective. This guy obviously isn’t obligated to pursue a relationship with you, but he could’ve at least treated you with some dignity. He didn’t, and this is at odds with the qualities he’s advertising.

Okay, let’s move from the problem to the solution. This might be very annoying at first. Might make you bristle with antagonism. Might make you rue the day you decided to write in to the Eve 6 Guy’s advice column. But it’s my job to help you out of the morass, not to help you wallow in it.

I’m talking about forgiveness. Not in the way where you make a martyr of yourself or ever again allow yourself to be vulnerable with this person. I’m talking about a selfish kind of forgiveness. Getting you to a place where you can forgive him, not for his sake, but for your own. He doesn’t get to know you’ve forgiven him because, honestly, fuck him, he doesn’t deserve to.

People who feel whole don’t treat other people the way he treated you.

Regardless of the public face this guy puts on, he is coming from a place of lacking, whether he’s conscious of it or not, and I would venture a guess that his seemingly selfless deeds may be compensatory. People who feel whole don’t treat other people the way he treated you.

As my de facto step mom Marianne Williamson says, people either act from a place of fear or love, and not both, because one negates the other. This guy feels scared and small, and he’s unconsciously asking you to see him as such, so let’s grant his request.

Fear is suffering. Recognizing fear in the person toward whom you have a resentment has a way of cultivating a gentler perspective toward them. Imagine a time when you acted out of fear and try to grant him the grace that you would have appreciated being shown to you. The goal is to take some of the potency out of the anger so you spend less time thinking about a person you’d rather not be thinking about at all.

Also, you should burn one of his wooden cutouts as an exercise in ritual healing.

How do you handle being online and watching other people’s success outshine yours?

I’m usually good at recognizing that my bitterness or envy comes from the desire to be successful — that there’s something in the successful person’s life I relate to and identify with. But, damn. It makes me want to leave the internet sometimes. However, I can't — or at least I feel like I can’t — because I use it to market my books and get clientele. I'm an author, and my online community is naturally made up of other writers.

Many times it’s easy for me to champion the success of others, but there are moments when I see a big book announcement or other publication news that makes me go, “I wish I had that!” It’s paradoxical because I do have stuff coming out. It’s like I can never be happy with what I have as a creator — or what I’ve made or how far I’ve come — and I am always striving for more.

It’s a thin line between being purpose-driven online and having it affect my mental health. Does Twitter affect your mental health and creativity? How do you deal with the bad feelings? And how would you recommend I balance my necessary online life with my IRL life so it doesn't affect me so much?

Jealousy is a rabid, frothing pitbull drunk on blood. I’m going to get the pitbull people coming after me for this one, and that’s good: more clicks. Yeah, that’s right, jealousy is a wasted dog. A truly cursed emotion. They say if you ever get attacked by a dog, you should let it bite your weak arm and punch it in the head with your strong one till it lets go — and that’s what you have to do with jealousy. You have to take off the gloves and box that motherfucker.

This, of course, is merely a bad metaphor. (I’m the Heart in a Blender Guy, what did you expect?) As with most problems of the mind, the solution is infuriatingly, skull-rattlingly simple and only involves a shift in perspective. Matter of fact, you already know the answer. I’m about to tell you a bunch of stuff you’re well aware of. But, if you’re like me, it’s sometimes helpful to hear something you already know from a person who isn’t you, so here goes. Let the reframing begin.

One thing to remember is everyone experiences jealousy, no matter where they land on the socioeconomic hierarchy. Look at Kanye West, he’s as successful as you can get as an artist, and he’s jealous as fuck. There is no amount of wealth or status that sates the mad dog. No one leaves Earth alive, and everyone experiences this base human emotion.

Another thing to be mindful of as an artist is capitalism’s role in placing seeming importance where there isn’t any. It’s the job of the artist to make stuff and stay out of the results. If a whole lot of people dig the thing you made, that’s great. But if you’re trying to make a thing with the object of making a whole lot of people dig it to get money, fame, whatever, there’s a good chance the thing you’re making will be garbage. If you’re following your whimsy and being true to your vision for vision’s sake, you will find gratification in that, and there’s a better chance others will too, even if it’s only a comparative few.

The other thing is gratitude. So annoying, I know. But it really is a practical tool for overcoming jealousy. You have a publisher, and by virtue of that fact alone, you’re among a tiny percentage of writers. When your book drops and you tweet about it, there probably will be a guy who reads that and gets jealous. I’m not saying that you should be grateful that other people may be jealous of you — that would be silly. I’m saying that when you take inventory, don’t forget to count the things you have going for you as opposed to the things you think you don’t.

Do I get jealous? Fuck yeah, I get jealous. Social media is a jealousy factory. Millions of people constantly trying to remind you of what they have and what you don’t. I get jealous a lot, but I’m pretty quick to put it in its right place, which is in the bin. The dustbin of unhelpful and completely human feelings.

And this is the last thing I’ll say: Don’t beat yourself up for feeling an uncomfortable emotion that literally everyone feels, because then you’re just adding another layer of needless suffering. Notice that you’re feeling jealous. Allow the emotion. Recognize that everyone feels it. Take stock of what you have going for you and go write the next great American novel.

Have a question for the Eve 6 Guy that’s tech- or internet-related (Grindr woes, Twitter drama, etc.)? Send it to Eve6guy@inputmag.com. Note: We’re currently looking for weed-related queries for the column dropping on 4/20.