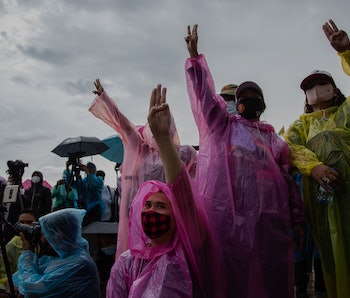 Facebook, everyone’s favorite arbiter of truth, has banned access in Thailand to a group critical of the country’s monarchy, according to The Guardian. Facebook blocked the group after being threatened with legal action by the Thai government.

Users who attempted to access the group were greeted on Monday night with a unique message: “Access to the group has been restricted within Thailand pursuant to a legal request from the ministry of digital economy and society.”

The group — called the “Royalist Marketplace” — has existed on Facebook since April by and is run by Pavin Chachavalpongpun, who The Guardian describes as a “self-exiled academic” and vocal critic of the Thai monarchy.

It seems Facebook’s concession to the government here is an unwilling one. The social media company confirmed in a statement that it’s planning to fight the decision. “Requests like this are severe, contravene international human rights laws, and have a chilling effect on people’s ability to express themselves,” Facebook said. The social network is once again being forced to reckon with the tension between its global communities, its desire to promote free speech (and be seen to be doing so), and local laws.

This is happening a lot — Facebook is facing legal ramifications from local authorities with increasing frequency. The company is a global one, with communities that gather from disparate cultures, which means it’s essentially subject to laws from all around the world. It also has to juggle different

As another example: after discovering anti-government posts on Facebook earlier this year, Vietnam took down the site’s local servers, significantly slowing traffic in the area. Facebook agreed to draw a more firm line on banning anti-state posts in the country, and Vietnam put the servers back online.

Facebook has also acquiesced to government demands in Singapore, where local authorities ordered the company to remove posts criticizing the government.

But lies and hate speech? Totally cool — It’s becoming increasingly obvious that the only way to force Facebook’s hand in removing content is to threaten it with high-stakes legal ramifications. In instances where the company faces backlash without its business being threatened, it’s nigh-impossible to get it to change its mind.

Here’s a shortlist of content that Facebook actively allows on its site: holocaust denial theories, misleading political ads, climate misinformation, hate speech from political leaders — the list goes on. Hate speech in particular has become a headache for the company, but even a massive advertiser boycott wasn’t enough to change Facebook’s policies.

Facebook, with Mark Zuckerberg at its helm, has consistently prioritized revenue over the well-being of its users. Rather than bettering its community, Facebook has repeatedly ignored the pleas of experts to change its policies. No wonder Zuckerberg so often allows Trump’s content to thrive on Facebook.