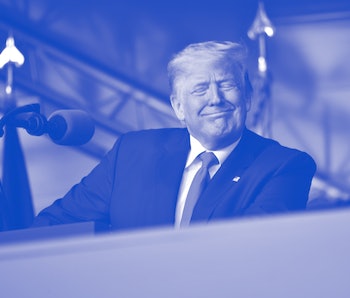 Facebook is working on contingency plans for a range of post-election doomsday scenarios, according to The New York Times. The strategy is specifically meant for the possibility that Donald Trump may dispute the election results or claim a false victory by harnessing the platform's notoriously lax advertising policies to sow doubt about the legitimacy of the democratic process.

Although Facebook has been spineless in combating fake claims from the President and has tended to side with the "newsworthiness" of even demonstrably false content, rumors suggest it may even label Trump's posts as false if he claims he's won the 2020 presidential race, but official numbers say otherwise.

It's insane that we're even talking about the possibility of a U.S. President refusing to accept defeat, but then, this is the same President who advocated drinking household cleaning products to defend against a pandemic he's tried to ignore into submission.

Operation "kill switch" — According to The New York Times, Facebook employees have been quietly working on a "kill switch" strategy for post-election purposes. This operation would turn off all political ads after November 3 if one of the two following scenarios unfold:

Officially, Facebook has not commented on the strategy. A company representative told The New York Times, "We continue to plan for a range of scenarios to make sure we are prepared for the upcoming election." According to the newspaper, Twitter and YouTube are also looking into post-election strategies in the likelihood of Trump attacking the results.

We're in for a ride — Clearly, the 2016 presidential race, the Cambridge Analytica fiasco, the rampant misinformation that thrives on Facebook, and the foreign interference that gave rise to a polarized and highly charged political landscape both on and off the internet, continues to haunt the United States.

Tech companies, in particular, have been viewed as either deliberate or unwitting accomplices in the discord that ensued. Now it looks like they don't want a four-year-long repeat of that instability and the mass rancor that came with it. At least that's what they say. Whether they'll have the backbone to stand up to the bully-in-chief remains to be seen.