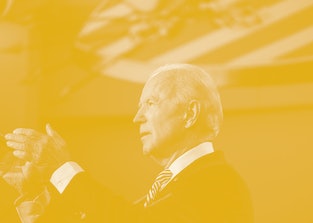 How many doctored photos of Joe Biden Trump's campaign has run.

Facebook has said it will stop accepting new political ads a week before the upcoming presidential election. But ads already accepted are still allowed to run, including the thousands that Trump's campaign has already posted that feature manipulated photos of Joe Biden.

In a new investigation by Media Matters For America, more than 2,500 advertisements were identified in which Biden's face is distorted to make him look older, while another thousand ads were edited to add an earpiece to pictures of Biden, supporting debunked reports that he cheated during the debate with President Trump.

Facebook prohibits manipulated media in political ads, though as this report underlines, enforcing its policies is a different matter altogether. The company has pulled a handful of ads after being alerted to them, but even if Facebook catches the rest, it may be too late — Media Matters found the offending ads have already garnered more than 17.2 million interactions.

Facebook has been taking a stronger stance on false information in recent weeks, including banning groups related to the QAnon movement. Catching them might prove challenging as members find ways to evade detection.

The damage has been done — Critics consistently say that Facebook doesn't act fast enough to clamp down on misinformation. Because of the sheer scale of its platform, tens of millions of people may see a piece of content before it gets deleted. Facebook was designed to scale quickly, and allow anyone to quickly blast out ads, but that aim is at odds with the goal of effectively policing for harmful content. Even when the company does identify harmful posts it can be slow to make a removal decision out of fear of angering different factions, like conservatives who falsely claim they're censored by Facebook.

Downranking dubious stories in the News Feed has proven to be another way for Facebook to punish posts without getting into too much hot water, but the company has also heavily promoted Groups — where content isn't suppressed in the same way.

The danger of acting cautiously is clear, however. Facebook's userbase has over the years become increasingly dominated by an older demographic more likely to share false stories. And its algorithm has been found to suggest progressively more radical groups to users, sending them into dangerous echo chambers of hate. People end up consuming a diet of only content that distorts their reality.

Attacking Section 230 — Biden has said that he "hates Facebook," particularly for its inaction on posts by Trump that cast doubt on the legitimacy of mail-in voting. He has said that should he become president he would, like Trump, seek to reign in Section 230 regulation that safeguards social media platforms from liability over what their users post. This report from Media Matters will surely further embolden Biden. He likely misunderstands Section 230, however, because getting rid of it would punish everyone, not just Trump.

Twitter has pushed back more aggressively against misinformation, removing tweets from Trump and officials in his administration. It also decided to stop accepting political ads altogether last year. The company decided it doesn't want to invest the resources in policing that type of content.

Both Facebook and Twitter are receiving pushback from Republicans for suppressing a story by the New York Post that was based on information purportedly stolen from a computer owned by Joe Biden's son Hunter. With the election fast approaching they're playing a balancing act, unsure what administration they'll be under next and what could mean for them.