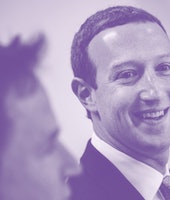 How much of the company's total market value this equates to.

Facebook announced this morning that it will be investing $100 million in the news industry as an effort to support journalism during the COVID-19 pandemic. Of those funds, only $25 million will go to local news outlets; the other $75 million will be spent in a marketing drive for international news organizations affected by the economic fallout of the pandemic. Fifty local newsrooms in the U.S. and Canada benefited from the first round of grants from the project.

The media industry has been hurting as a byproduct of the pandemic’s spread across the world. Local outlets have been most impaired by the economic fallout; Facebook’s investment will surely bring much-needed assistance to some of these smaller publications. But it also brings to mind questions about the company’s investment strategy. Why is one of the richest companies in the world not doing more?

This is pocket change for Facebook — Despite watching its own revenue dip in response to the pandemic, Facebook’s market cap is still fluctuating around half a trillion dollars. The company brought in an absolutely ludicrous $70 billion in ad revenue alone in 2019. CEO Mark Zuckerberg is valued somewhere around $58 billion himself; Forbes lists him as the fourth-richest person in the U.S.

Here’s what that boils down to: Facebook is investing .03 percent of last year’s ad revenue in local news outlets. That amounts to .005 percent of the company’s total market cap. That’s the equivalent of donating $15 of a $50,000 yearly salary.

It’s noteworthy as well that only a quarter of the funds announced today are being allocated toward local news. Three times as much money is being funneled into ad buys across the world, which may help some businesses in the long run, but is much less helpful in an immediate sense.

This is not to say the $25 million will go unappreciated. Facebook’s announcement spotlights on three local news outlets that have been able to cover travel costs and increase their free coronavirus coverage because of the grants. But what if the full $100 million had gone directly to local news? Better yet: what if $1 billion had been distributed to news organizations?

Facebook is doing good by investing in local news. But the massive company could be doing much, much more if it really cared about the fallout of COVID-19.