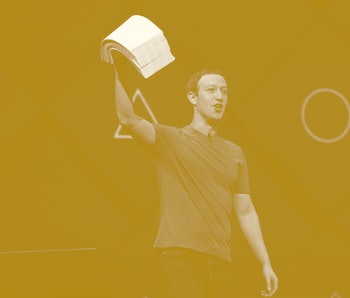 Facebook has used its outsized influence to silence the “Real Facebook Oversight Board,” a third-party group established last month as criticism against Facebook’s actual oversight board, which has largely proved toothless. Vice reports Facebook sent a letter to the internet service provider (ISP) associated with the group’s website, realfacebookoversight.org, asking for the domain to be taken offline.

The move was revealed thanks to Carole Cadwalladr, an investigative journalist from the U.K. who was nominated for a Pulitzer Prize for her work uncovering the Facebook-Cambridge Analytica scandal. Cadwalladr — who is also a founding member of the Real Facebook Oversight Board — tweeted images of a letter sent to her by SupportNation, the group’s ISP, on Wednesday.

In the letter, SupportNation says it received a complaint that the domain name had been involved in phishing. “The domain name has been registered to impersonate American social media conglomerate corporation, ‘Facebook Inc.,’” the letter reads.

As Cadwalladr points out, this is quite a hypocritical move from a company that claims to value free speech over everything else. Facebook couldn’t handle the heat of the group’s spotlight — so it cut off the electricity to the whole building. And it didn't even bother to follow the normal procedures for doing so.

About that committee... — Facebook first announced the Facebook Oversight Board back in May, while the presidential election was still a fairly distant speck on the horizon. The Oversight Board’s job description is simple: impartially watch over Facebook’s daily activities with a view to reducing the site's ability to cause harm, whether accidentally or intentionally.

The problem is that the board hasn’t actually done anything yet. After months of silence, Facebook finally reported the board would get to work sometime around the presidential election. Even that late start date would be contingent upon the testing of new technical systems that allow “users to appeal and the board to review cases.” Which sounds a lot like prevarication.

Very limited power — The oversight board sounds great on paper. A group of impartial judges to check Mark Zuckerberg’s near-infinite power? Sign us up!

The reality, though, is the board — if it ever does actually get to work — will still be quite limited in its power. It has no real say over how Zuckerberg manages his operation, nor can it influence Facebook’s content policies. It looks increasingly like a PR stunt, and nothing more. This is why third-party services matter.

Criticism? No thanks — Facebook has made it blatantly obvious with this takedown move that it has no tolerance for the sort of criticism being posed by the Real Facebook Oversight Board. This isn’t even the first time Facebook has done this — the company also forced the group’s original website offline over alleged copyright infringement.

Facebook has not responded to requests to elaborate on this; neither has the actual Oversight Board. Meanwhile, Facebook spokesperson Andy Stone replied of his own accord to Cadwalladr’s Twitter thread.

That one speaks volumes about how Facebook feels about the group of critics. Free speech is great, as long as it's not free speech that questions Facebook's practices or asks it to reform them.

Cadwalladr told Vice the takedowns are revealing about Facebook’s pattern of behaviors. “There is a brazen shamelessness at work here,” she said. “It's not just that a company that has used 'free speech' as a protective cloak would go after our ISP and drive us off the internet but that its official spokesman responds to such criticism by attacking and trolling journalists.”