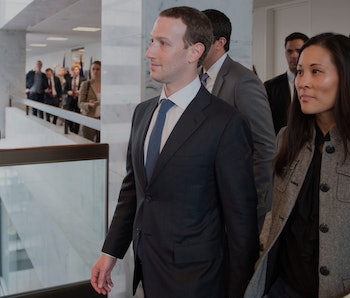 Facebook has been misrepresenting its potential audience reach to advertisers and therefore falsely inflating its revenues, according to an anonymous employee at the company. The Financial Times reports that the employee, a product manager in charge of potential reach at Facebook, proposed changes to this problem and was shot down.

The allegation has made its way to the public eye thanks to un-redacted sections of documents revealed in an ongoing class-action lawsuit against Facebook. “Facebook knew for years its potential reach was misleading,” the lawsuit alleges, “and concealed that fact to preserve its bottom line.”

Like most big internet companies, Facebook relies heavily on ad revenue for its overall profits. To know the company may have been pulling underhanded tactics to make more cash is hardly surprising, but it's also likely illegal, and only further tarnishes its already pretty sordid image.

This lawsuit is huge — Facebook has actually been fighting these allegations for ages. The lawsuit was originally filed in 2018 by a small-business owner in California, who claimed Facebook purposefully included fake accounts in its potential reach metrics to dupe advertisers and get away with charging them more.

The lawsuit cites evidence like Facebook-provided potential reach numbers higher than actual evidence could support. Facebook, in response, has argued that these metrics are only estimates; however, advertisers do use these metrics for budgeting purposes. They decide how much Facebook can charge and shape what advertisers are willing to pay.

This older lawsuit is back in the news because certain sections that had previously been redacted are now available for public consumption. Internal emails show that, when a product manager suggested altering the ad metrics to match reality, Facebook execs said no, because the “revenue impact” would be “significant.”

Other employees agreed with the product manager. One said that the “status quo in ad reach estimation and reporting is deeply wrong.”

Facebook’s not ready to fess up — Surprising no one at all, Facebook is outright denying these claims. A Facebook spokesperson said “the allegations are without merit” and that the company “will vigorously defend” itself.

Advertising is by far and away Facebook’s biggest money-maker. The company generated more than $84 billion in ad revenue last year— nearly 98 percent of its total profits. No wonder this is a touchy subject for the company.

When that ad revenue is threatened, Facebook has been known to lash out in unexpected — and usually transparent — ways. When Apple’s latest privacy updates sought to give users the choice to opt out of ad-tracking, for example, Facebook took out a full-page ad in large publications to force its complaints onto the backs of small business owners.

Meanwhile, this week it stopped showing news content in Australia in light of proposed legislation there that would see it having to pay local publishers for sharing their content. So yeah, we fully expect Facebook to fight this to its bitter end.