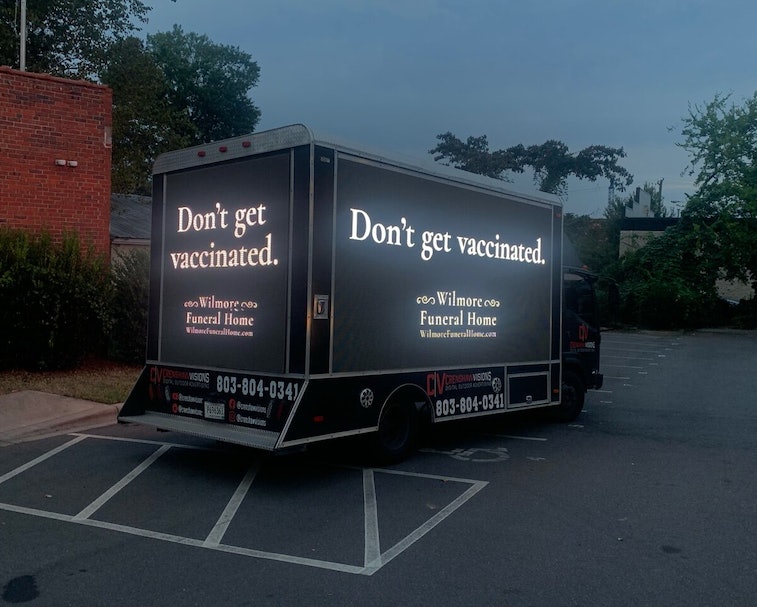 Tailgaters outside the Carolina Panthers vs. New Orleans Saints game at Bank of America Stadium in Charlotte saw a particularly dark advertising truck cruising around their festivities over the weekend. “Don’t get vaccinated,” read the vehicle’s advice, courtesy of the “Wilmore Funeral Home,” alongside a link to the supposed end-of-life service’s website. Upon pulling up the online link, however, visitors were quickly redirected to a vaccine registration page. Well played, “Wilmore Funeral.”

The fake business was actually concocted by an advertising agency called BooneOakley, which is based out of North Carolina, and helped brought to life (so to speak) by the truck’s owners at the fellow ad agency, Crenshaw Visions. “A lot of the advertising that’s out there right now is just, ‘Get the shot,’” BooneOakley’s president, David Oakley, told The New York Times. “We wanted something that made people think.”

Doing more than the other guys — As on-the-nose as BooneOakley’s latest PSA gimmick may be to some, it’s at least more helpful than some of many social media giants’ have managed over the past few months. After all, it’s only been a little over a month since a study was released that showed clear evidence Facebook’s algorithms and policies essentially help rightwing militia groups spread various COVID-19 vaccine misinformation to countless users. Would it surprise you to learn that, in part because of this, Facebook users are reportedly even more anti-vaccine than a lot of Fox News watchers? Because it really shouldn’t.

And then there’s ol’ Reddit — Over on 4chan-lite, Reddit’s own CEO recently made the claim that such COVID-19 misinformation was, more than anything else — wait for it — “the foundation of democracy.” Yeah, we shuddered after rereading that one, too. “[D]issent is a part of Reddit and the foundation of democracy,” Steve Huffman said in a post to r/announcements last month, which is all fine and good... were anti-vaxx arguments legitimate dissenting opinions, and not harmful, objectively false statements.