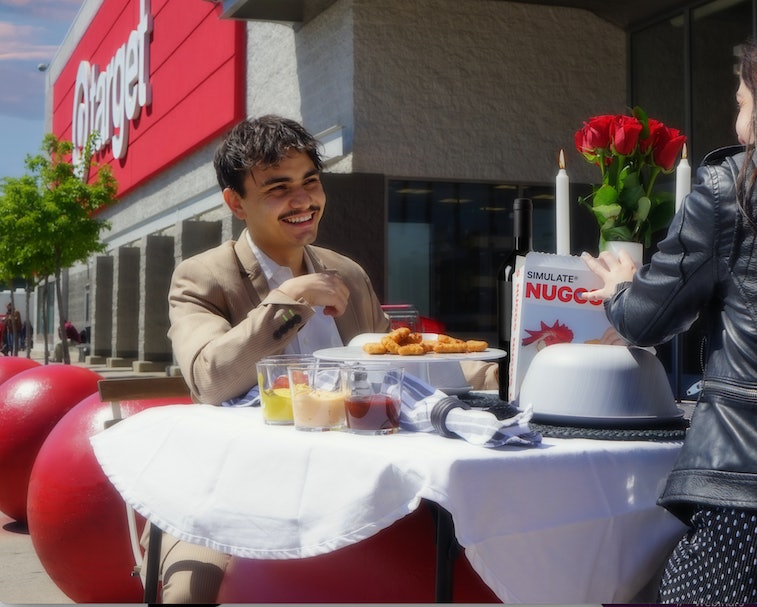 Simulate, which makes a plant-based imitation of chicken nuggets called NUGGS, is hosting a contest to give away a dinner for two at Target plus $2,000 to spend in the store. The best part? Your dinner table is set atop one of the storefront’s iconic red balls.

The contest is in celebration of NUGGS expanding into 388 Target locations around the United States. Simulate says its fake chicken nuggets are higher in protein and lower in fat than animal-based nuggets.

Once-in-a-lifetime — Of course, the menu for the dinner heavily incorporates the plant-based chicken. Just reading the description of the night’s menu has our mouths watering. “Think: a crispy, juicy and tender chicken nugget parm smothered in a rustic tomato reduction topped with melted mozzarella, served on top of spicy rigatoni pasta and paired with a full-bodied Pinot Noir to elevate the savory flavors of the dish.” Uh, yum.

Everyone knows Target’s iconic red balls — the spherical concrete bollards sit in front of the entrance and complement the brand’s aesthetic, but they’re actually meant to protect the store from cars. The opportunity to eat a dinner on a table atop one of them, especially a dinner so lavish, is truly a once-in-a-lifetime opportunity. Even if you don’t like fake meat, just imagine all the sweet content you could get out of this.

But if a table is placed on top of the concrete ball, it immediately raises the question, where are you supposed to put your legs? It turns out, Simulate went with the easiest solution and simply made a very large table that extends far around the ball. So your legs will be comfortable and you can play footsie with the ball while you eat.

Fake meat — Simulate is a smaller player in the meat imitation space, which is dominated by the likes of Beyond Meat and Impossible Foods which have made their way into major chain restaurants. Sustainability is a big factor in the push for these products. Factory farming has come under increased scrutiny, and livestock is responsible for a significant amount of greenhouse gases released into the air.

In order to enter the contest, sign up at simulate.com/ball. The entry period runs from May 6-13 and the dinner will take place one day later, on the 14th. NUGGS says it will fly to whatever city where the winner resides and execute the dinner within 48 hours. So, keep your calendar empty.