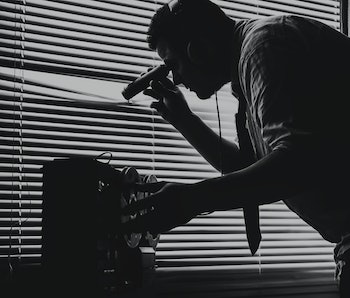 The Federal Bureau of Investigation (FBI) is notorious for abuses of civilian privacy but now, according to The Intercept, it's starting to worry about how its own surveillance tactics can be turned against it. A new report details classified information from FBI bulletins and documents about Amazon's Ring camera and other privatized surveillance devices, and how they are proving to be a threat to the agency's search power. The information comes from the collective Blueleaks hack revealed earlier this summer.

An incident from 2017 has particularly unsettled the agency. It details a New Orleans resident using his Wi-Fi connected doorbell camera to spot the presence of federal agents and alert his neighbor. The now-released document obtained in the hack states: "Through the WiFi doorbell system, the subject of the warrant remotely viewed the activity at his residence from another location and contacted his neighbor and landlord regarding the FBI’s presence there."

For an agency that has expanded its inspection authority and subsequently compromised citizen privacy over the past many decades, this sudden concern about surveillance will strike as comical to privacy advocates. You can almost hear them say, "Oh, how the tables have turned."

What the FBI says — In a leaked document about these surveillance devices that millions use for personal security purposes, the FBI laments the unintended consequence of this technology:

Subjects likely use Internet of Things devices to hinder law enforcement investigations and possibly monitor law enforcement activity. If used during the execution of a search, potential subjects could learn of law enforcement's presence nearby, and law enforcement personnel could have their images captured, thereby presenting a risk to their present and future safety.

Shifting power dynamic — It's ironic that the FBI mentions this worry considering that fact that it has overseen and cosigned Ring partnerships with various law enforcement departments in the United States, or how police authorities have used surveillance tactics like social media to "capture" images of protesters like this Black Lives Matter activist in New York.

The FBI is known for using intrusive and dangerous surveillance tools against both Americans and foreigners (particularly non-white migrants) within the country. From the days of COINTELPRO to post-9/11 spying tactics, the agency has blurred the lines between official investigation and violating constitutional rights.

The ability of these unassuming-looking doorbell cameras to counter-surveil the top spy won't radically change the highly-unequal power dynamic between government and citizen, but it certainly shows us that such technology can unintentionally tip in the favor of the more vulnerable. And when it does, the dominant team won't like it. At all.