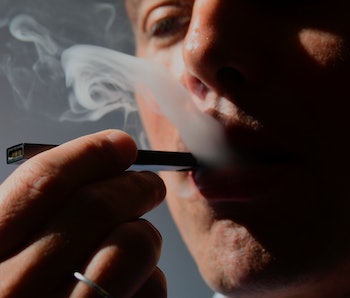 The Food and Drug Administration is extinguishing the once monolithic e-cig makers at Juul, although remaining brand loyalists most likely won’t need to ween themselves away anytime soon. As The Wall Street Journal first reported on Wednesday, and confirmed this morning, the FDA has moved to order all products from Juul Labs Inc. off shelves following a nearly two-year review of the company’s application to sell tobacco and menthol flavored e-cigarettes.

While rich white parents nationwide are likely breathing a sigh of relief, the Kids These Days almost certainly still have some time to rip a few last vape clouds — Juul will most likely appeal the ruling, a process that could delay their demise by at least a year, according to one analyst from Cowen who spoke to The Guardian.

The FDA has been after Juul in particular for years now, investigating the company’s formerly available “sweet and fruity” vape flavors, arguing (with absolutely solid evidence) that the products served as a gateway for underage consumers to transition towards tobacco cigarettes. It’s unclear if the federal agency plans to make examples of competitors like Reynolds American and NJOY Holdings next, although last October the FDA cleared a company called British American Tobacco to manufacture and sell its Vuse Solo e-cigarettes and tobacco-flavored pods.

A somewhat surprise decision — As one analyst explained to The Guardian on Wednesday, the FDA’s decision “clearly comes as a surprise to the market,” especially since Juul appeared to be following the strategy of competitors like British American by seeking permission for simple tobacco flavored products. From the outside, it appears the FDA is particularly unhappy with Juul, whose sales tactics and investment partners in Big Tobacco players like Altria Group were seen as too brazen in their efforts to hook consumers (including teens) on their products as early as possible.

And you know what? It’s sorta hard to argue with that, seeing as how Juul was found to exploit advertising loopholes that allowed it to shill products on websites affiliated with both Nickelodeon and Cartoon Network. Between that kind of shady behavior and half-hearted compromises like “childproof” e-cigs, the FDA laying the hammer down feels like an inevitability.