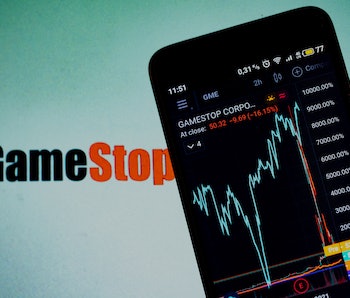 Federal agencies including the Justice Department's fraud detection unit are looking into possible market manipulation in the face of the GameStop shares spike that took place in January, the Wall Street Journal reports. Already prosecutors have subpoenaed critical details around the surge that lasted about two weeks from groups like the now-infamous Robinhood.

Now, however, federal investigators — including the Commodity Futures Trading Commission — seek to expose individual traders for possible misconduct. These agencies want to determine whether the trading mania was a well-planned pump and dump scheme, in which traders cooperated with each other to artificially inflate and exaggerate GameStop's price and then sealed profit by selling it to unaware people.

Will this work? — While it sounds like federal authorities are aggressively pursuing this issue, it is incredibly arduous to prove intention in court, especially when it comes to coordinated efforts led by a group of individuals. Security lawyers have already told the Wall Street Journal that those seeking to expose alleged manipulators will have to demonstrate that there was a collusion among various individuals.

In Reddit's case, this would be almost impossible. Of course, authorities can summon prominent figures like Reddit CEO Steve Huffman but it is hard to imagine any of these agencies credibly spotting individual users without compromising their privacy and then requiring them to appear before lawmakers. After all, the overwhelming majority of WallStreetBets' users operated under (frequently amusing) pseudonyms.

Lawyers already say that it isn't viable to charge hundreds or even thousands of defendants with trading manipulation as a coordinated scheme to throw hedge funds off. If prosecutors truly go after these users, they will have to take advantage of blue sheets which are used by brokers to single out individual traders. But even then, regulators and prosecutors have to link that trade to a public statement and then form an association that can be tried in court.

It's a headache-inducing and uphill battle. So far, there is no concrete proof indicating that there was a mass scheme to manipulate trading technology. And it is possible that federal aggression on the matter will be seen as an unfair pursuit of everyday people who, for once in their lives, managed to temporarily throw Wall Street off balance. If authorities are interested in altruism and fairness, they should consider talking to GameStop employees who don't sound so happy about their employer or this frenzy.