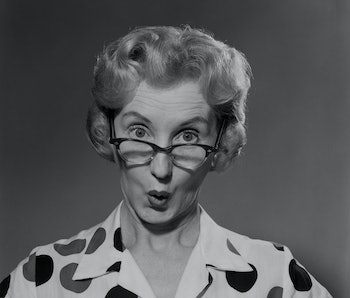 Kids and teens have it hard enough as it is right now with the perils of online bullying, social media shaming and... yearbook doctoring in Florida. As the New York Times reported yesterday, many female students at a high school in Florida were recently stunned to find administrators had surreptitiously altered their yearbook portraits to hide their chests.

Over 80 girls enrolled at Bartram Trail High School in St. Johns County, Florida, were the recipients of puritanical (not to mention impressively shitty) Photoshop cover-up jobs for what the school claims were “dress code violations.”

Examples include a ninth-grader who opened her yearbook to find a black bar layered to crop out her sliver of cleavage and a classmate whose plaid shirt was just copy-pasted similarly across the bottom half of her photo. Another picture has a similar copy-paste to cover up a girl’s (gasp) bare shoulders.

“The school did a horrible job of protecting our children’s mental health by body-shaming. It’s making our kids feel like they should cover up their bodies, they should be ashamed of them, and it was humiliating for many of them,” one mother explained to the NYT. Meanwhile, photos such as a picture of the high school boys swim team wearing only Speedos made it into the yearbook unedited.

Promising redress — A school representative told The Saint Augustine Record that administrators are currently offering yearbook refunds and “receiving feedback from parents/guardians/students on making this process better for next year.” Here’s some feedback of our own: stop being terrified of the female body and promote a safe, inclusive learning environment for all your students, you regressive asshats.

A history of sexist, creepy humiliation — As students’ parents related to news outlets, the new yearbook photo scandal is hardly the first instance of local school administrators’ sexist, body-shaming attitudes towards their female student population. In the past, officials have lined up in high school hallways and “called out dozens of girls or took them out of class for violating the dress code,” which includes stipulations like requiring females’ shoulders to be covered at all times.

Additionally, a male teacher reportedly “called out at a student who wore a zip-up jacket over a sports bra” recently. So yeah... it’s a bit of an endemic problem at Bartram Trail High School (not to mention countless other schools across the country, not just in Florida).

Signs of solidarity — Thankfully, there has been a sizable groundswell of support from parents, the public, and even male students at Bartram Trail for changing the antiquated, gendered dress code. Nearly 5,000 signatures have been added to a petition created following the dress code hallway sweep, and “some of the boys protested in solidarity with the girls by wearing dresses and skirts” the following day.

As they say: The kids are alright... even if their school administrators definitely aren’t.