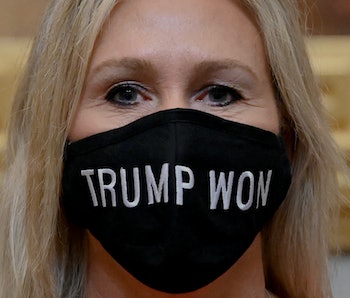 The only thing Republicans love more than misinterpreting the First Amendment is abusing the Second, but a new law passed in Florida is giving the GOP’s gun-worshipping a run for its money. Earlier today, Governor Ron DeSantis signed a bill allowing the state to begin heavily fining social media sites like Facebook, Twitter, and YouTube if they move to permanently ban candidates running in local political races.

The new law was first announced in direct response to Donald Trump’s widespread social media blacklisting earlier in the year after his online posts helped foment the deadly January 6 putsch attempt on Capitol Hill and he insisted on lying about the outcome of last year’s Presidential election.

“If Big Tech censors enforce rules inconsistently, to discriminate in favor of the dominant Silicon Valley ideology, they will now be held accountable,” Gov. DeSantis bloviated in an official statement. As written, the new law allows websites to temporarily ban statewide politicians and political candidates for up to 14 days for content violations, after which time the Florida government can fine those companies up to $250,000 for each additional day a ban remains in force.

You’d expect the party so intent on defending the rights of the individual and businesses to conduct themselves as they see fit would balk at telling some of America’s most successful companies what to do... but then, the contemporary GOP doesn’t actually practice what it preaches. Instead, it cowers, grovels, and scrapes in the hopes of keeping Trumpists voting for it, while also preventing them from actually examing any of its policies.

A tired tale — DeSantis, along with a large number of Republicans across the nation pushing for similar state laws, still don’t seem to understand that platforms like Facebook and Twitter, being private companies, are free to monitor and ban accounts as they deem fit. It’s also totally possible they do understand this and are merely pushing these bills to continue garnering support from Trump’s cultists. Either way, the new law will almost certainly be challenged in court. Meanwhile, people like Rep. Majorie Taylor Greene will continue spouting awful, offensive, totally ban-worthy lies online while facing few consequences.

A right to lie without consequences — As the new law stands, local Florida political candidates can basically say whatever they want, no matter how egregious or demonstrably false, and all Facebook and Twitter could do is ostensibly slap them on the wrist (not that the companies have done much better until very, very recently). It’s clear the bill — and the others like it — are designed specifically to benefit Republican politicians (especially the more conservative / deranged among them) in the wake of social media sites finally cracking down on hate speech and misinformation.

Desperate times call for desperate legislative measures — Republicans are desperate to maintain their presence on mainstream social media platforms given how piss-poor their “alternatives” have fared. It seems unlikely that these kinds of laws could hold up under much legal scrutiny, so in the end (once again) this will likely turn out to be little more than yet another Republican PR stunt to keep Trump and his devotees happy.

The Santa Clause Clause — To make the proposed law even more ridiculous, an 11th-hour clause was added to the bill exempting companies who operate “a theme park or entertainment complex” from the fines... meaning Disney. As multiple outlets have noted, this was included solely to protect Disney’s streaming platforms from monetary consequence, showing everyone just how hypocritical and pointless the new law truly is.

Conservatives aren’t being silenced — Given that, until only a few months ago, Republicans controlled every political branch of the Federal government, many statewide governments, the Presidency, multiple major news outlets, and a weaponized death cult, one could be forgiven for thinking that conservatives have been anything but silenced. But Republicans love to claim they are being “shadow-banned,” “deplatformed,” or otherwise victimized and downtrodden despite heaps of evidence to the contrary. Of course, many Republicans stopped putting any weight in “evidence” five years ago, so this is as unsurprising as it is tragic.