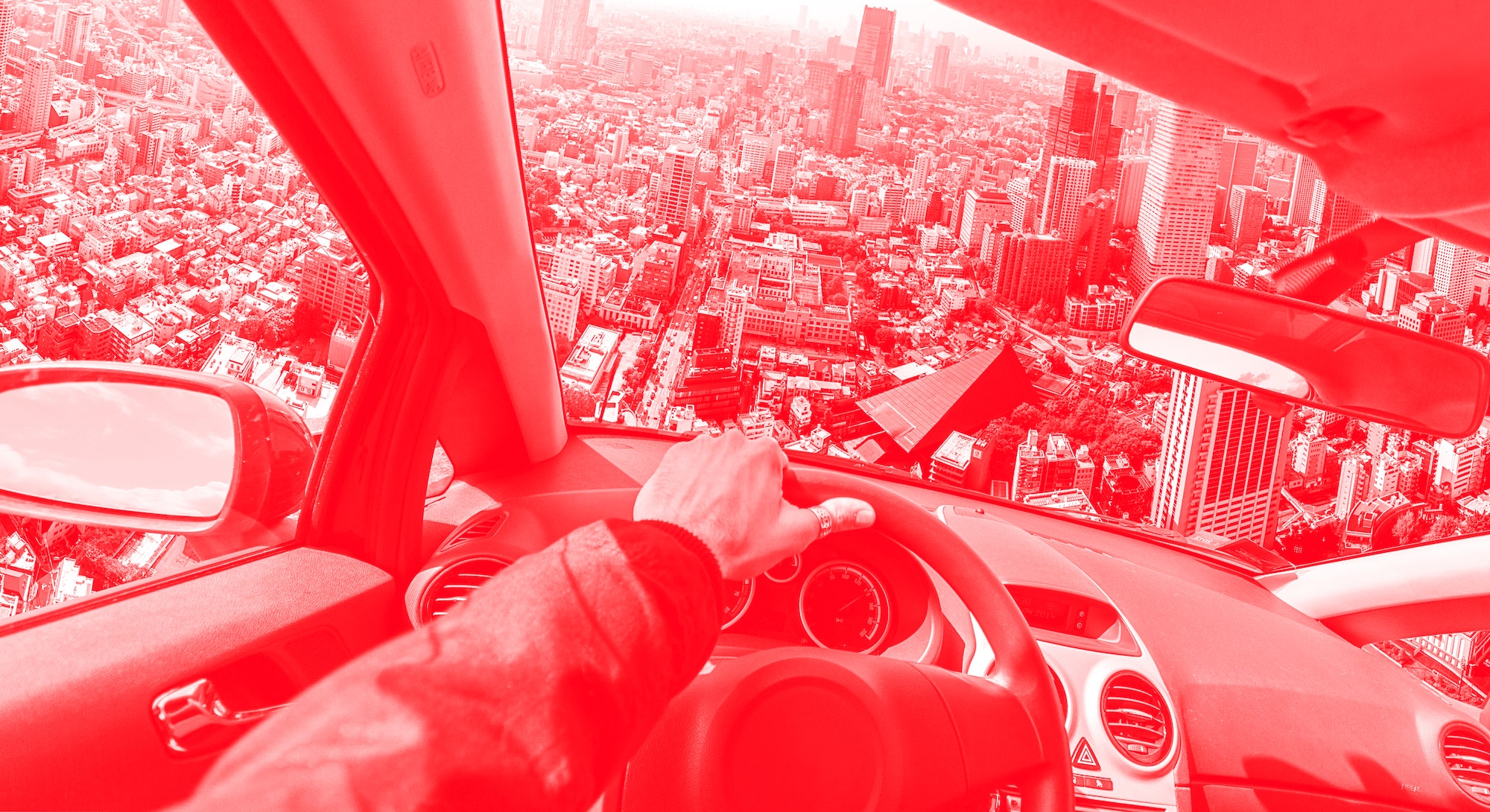 “Mark my words: a combination airplane and motorcar is coming. You may smile, but it will come.”

Henry Ford made his now-famous prediction back in 1940, after a lifetime spent dedicated to revolutionizing both modern travel and American industrialism. But he also once wrote, “If fans wish to know the trouble with American baseball they have it in three words — too much Jew.” So the guy was also pretty full of shit.

It’s not that Ford was wrong about the flying cars. There have certainly been a fair share of sky sedans in the ensuing decades. There was the ConVairCar Model 118 of 1946 (crashed) and the 1973 AVE Mizar (also crashed). Perhaps history’s most famous was the Aerocar, which managed its first successful flight in 1949. The Civil Aviation Authority approved Mott Taylor’s design for mass production seven years later, and Chuck Berry even wrote a song about it. But looking up toward the carless clouds today, it’s pretty clear how that project turned out.

Flying cars’ pop-cultural parking spot has existed for so long that most of us take it for granted. It is, and seemingly always will be, the vehicle of tomorrow — the moment they start zipping around is when we will know we have reached our collective New Day. But despite the flying car’s repeated cameos in sci-fi books, film, and TV, it remains the abject worst benchmark for society’s arrival into that mythical, much-promised “future.” So why the hell do we still dream about them, much less attempt to make them a reality?

“The future we were promised was from just before the Second World War, and had such strong powerful images that I think we’ve got stuck with that future,” says Patrick Gyger, author of Flying Cars: The Extraordinary History of Cars Designed for Tomorrow’s World and former director of Sweden’s Maison d’Ailleurs (the House of Elsewhere), a museum dedicated to utopias, science fictions, and futurist thought.

Despite the fact that all our smartphones, surveillance tech, space tourism, and collapsing ecosystems put us well beyond the futures depicted in many classic stories, “many of the images that were created mid-20th Century feel kind of imprinted as part of the future,” explains Gyger.

Flying cars remain the worst benchmark for our arrival into the future.

Flying cars may have truly taken off (sorry) in our imaginations following WWII, but its origins go even further back. Many consider pop culture’s first introduction to the concept of a flying car to be Jules Verne’s 1904 novel Master of the World. The book’s hybrid boat-car-plane, the appropriately named Terror, showed up only a year after the Wright Brothers’ first successful flight. At this stage in American cultural thought, the sky was literally the limit. This is where Andrew Glass, author of the 2015 young adult history book Flying Cars: The True Story, believes the idea became cemented in our minds.

“You drove out of town, and you just hit mud,” he says of the time. “There were cars before there were roads, so the solution, some people thought, was to attach these sorts of wings from primitive flying machines to the tops of cars. That seemed like the more likely solution than a complex network of highways, which seemed impossible.” According to Glass, people truly believed the transition “from horse, to horseless, to flying” was only a matter of time.

As highways proved themselves not only possible but necessary to the development of an industrialized country, Americans found themselves spending more and more time in their (land-limited) vehicles on those interstate roads, often moving at a snail’s pace due to traffic.

It’s likely that very few of us envision sci-fi’s flying cars cruising across idyllic countryside pastures. Instead, it’s the ultimate projection of freedom — an “extremely individualistic dream,” as Gyger puts it — from a crowded, oppressive, collapsing environment. It’s a literal means to soar above the capitalist, industrialized world around us.

When we think of flying cars, we envision crafts like Deckard’s spinner in Blade Runner as it soars towards the monolithic Tyrell Corporation’s headquarters through a largely empty sky. But like so many dreams, it’s a fantasy with little basis in the real world, or even within the realm of true possibility.

“Obviously if everyone had a flying car, it would be the same — just a traffic jam in the air,” Gyger says. “Most people, when you talk to them about flying cars, assume you’re talking about something that if you’re caught in traffic you can just pick up speed and take off above that car [ahead of you]. They never think about finding a landing strip.”

As Gyger notes, commercial and transport airplanes don’t arbitrarily fly wherever they please; they rigidly follow preordained routes. “Planes actually follow a flight path,” he says. “So that makes the flying car something completely unrealistic, not in a technical approach, but in the philosophy it’s supposed to nurture.”

In a post-WWII world, when popular science fiction often played a role in selling us a sleek, shiny, capitalistic American Dream, flying cars were presented as luxury tools enabling our freedom from the claustrophobic everyday. But nothing, especially airborne sedans, is for free. Flying cars, more than anything else, push the narrative of what Gyger calls “freedom through consumption.” Flying cars become both the sum of, and escape from, the inherent problems within capitalist industrialization.

“The future really should be public transport.”

There are quite a few projects actively working toward building cars that can also soar through the skies. The Moller Skycar purportedly travels about two-and-a-half hours at 331 mph, so that’s pretty cool for the recreational pilot with $3.5 million burning a hole in their pocket. The Dutch are building the PAL-V, a sleek copter-car that’s slightly cheaper than Moller’s, but not by much.

Realistically, though, if any flying cars make it into our daily lives, they’ll most likely look like the Ehang 184, which is less a flying car, and more like a passenger-commuter drone meant to ferry the uber-wealthy between glittering, phallic skyscrapers far above everyday rabble like you or me. They won’t belong to the everyday commuters — they’ll belong to their asshat bosses.

To Gyger, the future arrived a long time ago, and it’s not found inside a flying car’s cockpit, but in something extremely mundane. “The future really should be public transport — very well-developed tramway systems with renewable energy,” he says. “And bicycle lanes.”

While it may not be surprising that our most impactful reference point for the future hasn’t materialized after a century of real-world attempts and fictional depictions, it is strange that we refuse to accept the notion that flying cars are a bad idea. A truly liberated and individualist future is one that moves away from outdated modes of thinking and embraces communal health, environmental restoration, and practical air-traffic safety laws.

The flying car is a lemon — it’s far past time to leave it on the side of the road and hop the next (preferably electric) train toward tomorrow.