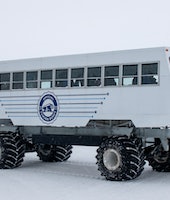 The number of polar bears estimated to remain in the wild.

Every now and then, climate change denialists love to tout the supposed fact that polar bears, contrary to popular belief, are doing better now than they have been in nearly six decades. And while, yes, there are an estimated 26,000 roaming the wild today, the fact remains that the rapidly warming Arctic spells disaster for the species, with some experts projecting the population to decrease as much as 30 percent by 2050. Also... 26,000 is still a ridiculously low number for pretty much any animal. Anyway, a new eco-friendly beast of a transport unit is now careening across the arctic tundra to get visitors closer to the few remaining polar bears out there.

Per Gizmodo, Frontiers North Adventures in Manitoba, Canada, received a hefty grant to trick out its Tundra Buggy and convert it into a fully electric Bear Bus (I made that nickname up, please don’t Google that term). While it doesn’t do much to cut down on our overall carbon footprint, as Gizmodo notes, “it shows EVs can work just about anywhere, which is good news for the polar bears whose continued existence banks on humanity to get its shit together.” Couldn’t have said it better ourselves.

As thicc as an arctic polar bear — If you couldn’t tell from the picture above, the EV Tundra Buggy is, to put it mildly, friggin’ huge. At 40-feet long, it can safely pack in 40 polar bear snacks (sorry, humans), with 5-foot-diameter wheels to handle the unforgiving environment around them.

Unfortunately, visitors to the area are gonna have to wait until next year to see any actual polar bears. Given that it's winter currently, all the animals have apparently already trekked out onto the ice — as impressive as the EV Tundra Buggy is, it’s probably safe to say its owners aren’t looking to take any risks out there right away.