Get ready for tender, woke dating in 2021, OkCupid predicts 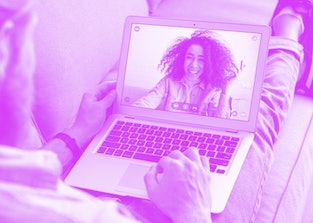 The number of responses to OkCupid questions this year.

For the first time, OkCupid has crafted a Future of Dating report based on nearly half a billion question responses. The data yielded eight trends singles have to look forward to in 2021. OkCupid is known for its question-based approach to compiling data, whether it's helping people to connect or confronting them with biases. It’s the most common app mentioned in The New York Times Wedding section and its racial attraction research launched a mainstream conversation about preferences informed by systemic racism. While it’s unsettling that it can do whatever it wants with all that highly personal data, the dating platform’s research tends to offer accurate windows into modern dating culture.

What to expect next year — OkCupid saw a 700 percent uptick in users in just the first three months of lockdown. This influx of users brought fresh data to the app, allowing it to make predictions about the future of ideology in dating as well as a shift in speeds and expectations.

Ideology shifts — OkCupid users have been getting more woke since 2017 and the trend is only growing stronger. Climate change is a major issue, especially for younger users, with 85 percent of millennial respondents and 84 percent of Gen Zers saying they’re concerned about the crisis. More people across the globe consider themselves activists in general with women and Gen Zers more likely to think so.

When it comes to politics, 64 percent of the nearly 3 million people who responded to the question “Do you prefer that your date shares your political views?” thought similar views were important. Year-over-year, respondents who couldn’t date someone with strong, opposite political views jumped from 53 percent to 60 percent.

Though these numbers are global, the polarization of political parties in the U.S. is a clear reason for this shift (and Facebook has done its fair share of radicalization beyond our borders). As opposite views have shifted from big vs. small government to whether you believe in basic human and civil rights for everyone or not, agreeing to disagree is less of an option.

Virtual dating’s impact — As people are forced to date virtually during the pandemic, tried and true aspects of the modern dating scene are being turned on their heads. Too many selfies were once a red flag, but as our candid shots age, smiling selfies reign supreme.

Now accustomed to Zoom dates, people are also more open to long-distance cross-cultural relationships. For those itching to meet in person, 59 percent of people across the globe are more interested in adventurous, outdoor dates.

In the thick of relationships, people are seeking more emotional connections and women are sending intro messages more than ever. With emotion-first dating, it’s no surprise that people are expected to move in together sooner, especially with the pandemic exposing the pitfalls of living alone.

From the political to the interpersonal, external factors are fueling empathetic paradigm shifts in how we relate to ourselves and to others. Based on this data, it looks like we’re swiping left on hookup culture for good.