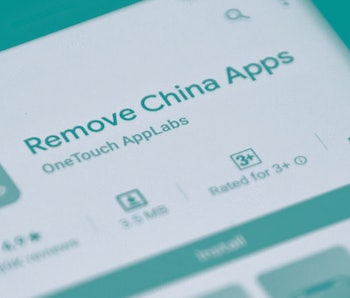 Well, that was fast. Remove China Apps, the viral Android app for flagging software made in China, has been removed from Google’s Play Store, TechCrunch reports. Before its demise, the app had reached the coveted number-one free download spot on the Play Store.

The app was removed for violating Google’s “Deceptive Behavior Policy,” which states that apps cannot incentivize users to disable or remove other applications. Though Remove China Apps did not remove apps automatically, it did prompt users to do so. It had been downloaded more than 5 million times before its removal.

Google is notoriously bad at policing its own Play Store, so the swift removal here is something of an outlier. The app’s quick rise to fame made waves, especially in its home market of India, which likely led to a faster-than-usual investigation on Google’s part.

Anti-China sentiment grows — It turns out people with strong opinions about China will do just about anything to keep the country’s reach away from their personal lives, up to and including the installation of a sketchy-at-best app from an unknown creator.

According to Global Times, a news outlet run by the Chinese state, continued anti-China sentiment throughout India is “likely to draw tit-for-tat punishment from Beijing.” The report also notes that some in China have poked fun at the rise of Remove China Apps, urging Indian users to throw their smartphones away completely if they didn’t like China.

Let’s keep this energy — Google jumped on this removal much, much more quickly than it usually does. The company is historically very bad at monitoring the Play Store for apps both harmful and just plain annoying, despite its seemingly strict policies about Play Store content.

When the dangerous conspiracy group QAnon uploaded a set of apps for spreading misinformation to users, for example, it took Google months to remove the apps from the Play Store. And that was with specific reports filed by activist groups; it likely would have taken much longer for Google to detect the violations on its own.

Google’s ostensibly strong stance against the spread of misinformation on the internet is made much weaker by its continued inability to keep its own platforms clean of dangerous apps. Such a massive tech conglomerate shouldn’t need headlines and user tips to find and remove these apps. It’s obvious the company needs to re-work its approval policies; otherwise, this problem is bound to persist in the future.