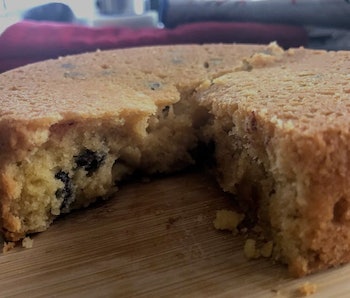 As we learn more about the immense, world-altering capabilities of artificial intelligence, so too do we come to understand its more creative applications. Google’s latest entry into that field is tastier than its usual AI experiments — the company has used machine learning to create two new hybrid baking recipes.

The first, a “cakie,” is a cake-cookie hybrid. The second, a “breakie,” is a bread-cookie hybrid. As you can see below, neither looks like something you’d choose from the display case at your local bakery, but Google’s concentrating more on science than aesthetics here.

It’s one of those well, duh moments that leaves us wondering why we didn’t put artificial intelligence to this use earlier. Baking is mostly chemistry — of course it makes sense to use ultra-logical systems to boil it down to its basic components. These first “hybrid” recipes are strange, to be sure, but the first person to ever make scones probably thought they were a bit odd, too. Right?

No coding required — There’s a tendency to think of artificial intelligence and machine learning as needing hyper-specific knowledge to function. But Google’s baking experiment actually uses simplified tools that the average internet user could figure out with a little trial and error.

The tool in question: AutoML Tables, a Google Cloud function that essentially takes tables of spreadsheet data and processes them into machine learning algorithms. Google’s been updating AutoML Tables lately to make them more user-friendly, including better explanatory tools for the less tech-savvy.

By using AutoML Tables, Google researchers were able to create custom “scores” for categories like “cake,” “bread,” and “cookie,” effectively allowing the machine learning model to read a recipe’s ingredients and guess with a high degree of confidence which category a recipe fell into. And, thanks to those same models, researchers were able to train the AI to create entirely new recipes like the breakie and the cakie.

The human element — There is at least one important thing AI can’t do yet: be human. Yes, this sounds obvious, but there’s inherent, random messiness to our activities in the kitchen that machine learning hasn’t perfected just yet.

Science can create recipes, sure, but making them a joy to eat is an entirely human feat. One researcher, Sara Robinson, said of the cakie: “It is yummy. And it strangely tastes like what I’d imagine would happen if I told a machine to make a cake cookie hybrid.”

So it’s no surprise, really, that both the breakie and the cakie look as if they’ve been made by something, well, inhuman. Maybe someday AI will fully replicate the human condition and be able to yell at sous chefs like Gordon Ramsay, or create unusual combinations with the flair of Heston Blumenthal. but if we manage to do that, we might have some ethical questions to answer outside of just baking... or some more pressing problems at which to point the tech.