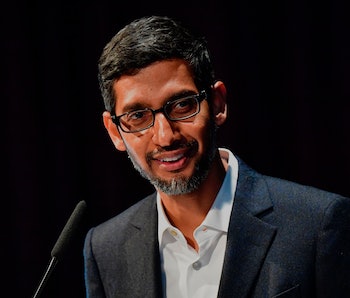 bAn internal Google document reveals just how unnerved the company is by antitrust scrutiny. First reported and shared by The Markup, the document advises Google employees to choose their words carefully and assume every conservation they have, including casual chat, could be observed and picked apart by regulators down the line.

Examples include Google higher-ups advising workers to use "area" or "industry" or "space" instead of clearcut economic terms like "market." Similarly, they're told to say "valuable to users" when suggesting "network effects." "Barriers to entry" should be replaced with "challenges." Phrasing like "cut off competitors' access to target" should be left aside for more tame and vague phrases like "integrate target with Google."

On the surface, these are cosmetic changes to the language used within the company. But when you look closer, you can tell Sundar Pichai and the rest of Google's leadership team are trying their best to ward off regulators as Capitol Hill and Europe breathes down their necks.

What does the document say? — Titled "Five Rules of Thumb," the Google internal document is simply two pages. But it packs a bunch of rules around conversation, including simple back and forths. Right off the bat, the document warns that "words matter" especially when it comes to antitrust law. The rules focus on conversation in nearly every form within the company, including email, notes, and Post-Its. It even emphasizes that Google employees' use of sarcasm, irony, or hyperbole can lead to legal trouble "even where our intent was perfectly legitimate."

The main five rules come down to emphasizing that Google wants to help consumers, that it supports consumer choice to switch options, that it has "lots of competitors" and is not interested in "controlling or dominating" the market, and that employees should avoid making guesses about Google's share of any sector.

Google employees on their tiptoes — The most important and noteworthy rule of all five comes at the very end: "Assume every document you generate, including email, will be seen by regulators." At the bottom of the document, employees are encouraged to contact "competition-questions@google.com" for more information and clarity.

How Google justifies it — Since the document was made public by The Markup, Google representatives have attempted to explain the set of rules as entirely commonplace. In a statement to The Verge, Google spokesperson Julie Tarallo McAlister said that the rules are "completely standard competition law compliance trainings that most large companies provide to their employees." She also noted that the rules have been in effect for the past 10 years.

Rules around language within a workplace are not out of the ordinary. That said, it's the context that makes this decision by Alphabet's Google interesting. Amid some of the most intense antitrust criticism, a company actively telling its workers to tiptoe around language is clearly worried about legal scrutiny. Just look at the admonishing Mark Zuckerberg received for once openly saying he wanted to "neutralize Instagram." You words may come back to haunt you, especially if they're written down or recorded and you're a gigantic company with a history of systematically acquiring or crippling your competitors.

More like this
Will Gendron
Sep. 16, 2022
Culture
Coinbase pushing pro crypto-lobbying crusade through its app
Chris Stokel-Walker
Sep. 15, 2022
Marketing
Why it’s so tough to be a brand on BeReal
Annie Rauwerda
Sep. 19, 2022
Culture
A ragtag community is keeping this aughts Wikipedia gadget alive