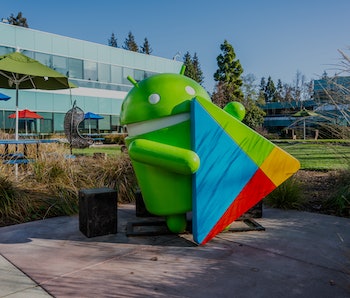 Just when Apple is being attacked from all sides over the 30 percent commission it charges on in-app purchases (or 15% for recurring subscriptions after the first year), Google's decided it wants a piece of the action. It wrote a blog post today clarifying that companies like Netflix and Spotify cannot bypass its payment system as they've been doing to date and must hand over a 30 percent cut of sales made through apps offered in the Play Store.

The fun is over — Google has received less scrutiny than Apple over the issue because Android allows users to download alternative app stores. Epic Games — for instance — which is embroiled in an ongoing legal battle with both Apple and Google, has its own game store available on Android. Epic doesn't think that's good enough, because 90 percent of Android users download their apps through the Play Store.

The 30 percent tax has long been required by Google but it hasn't been enforced as strictly as on iOS. Netflix and others have bypassed the company's requirement by directing users to a webpage to buy subscriptions — if the same developers try this on iOS, Apple blocks them. Google says companies have until September 30, 2021, to switch their apps over to its payment system.

Platform power — Developers say that Apple and Google's terms are unfair because they must either comply with demands or risk being blocked on the mobile operating systems that power the majority of smartphones around the world. Rules prohibiting certain apps stifle open competition, they argue — like Apple limiting native apps for cloud-based gaming services — and the fees violate antitrust law by raising prices because developers are required to pass the "Apple tax" onto consumers.

A group of developers including Netflix and Epic last week formed a group called the Coalition for App Fairness to push for better terms.

Neither Netflix nor Spotify allow new users to buy subscriptions through their iOS apps in order to circumvent Apple's toll. That may become the case on Android, too, under the new guidelines. Companies that rely on in-app purchases, like game developers, don't have the same side-stepping option, though, and smaller companies can't afford to jack up prices or to risk Apple's ire by trying to go around it. Apple and Google often say they fund work maintaining a safe app store environment but in-app fees are also a lucrative new business for each of the technology giants, especially in the gaming category.

Google is being investigated by the Department of Justice over the power it wields in search to promote its own services over those from competitors. There's no indication that the Play Store is being targeted yet, but you can bet Google is eager to keep it that way with any preemptive measures it deems fit.