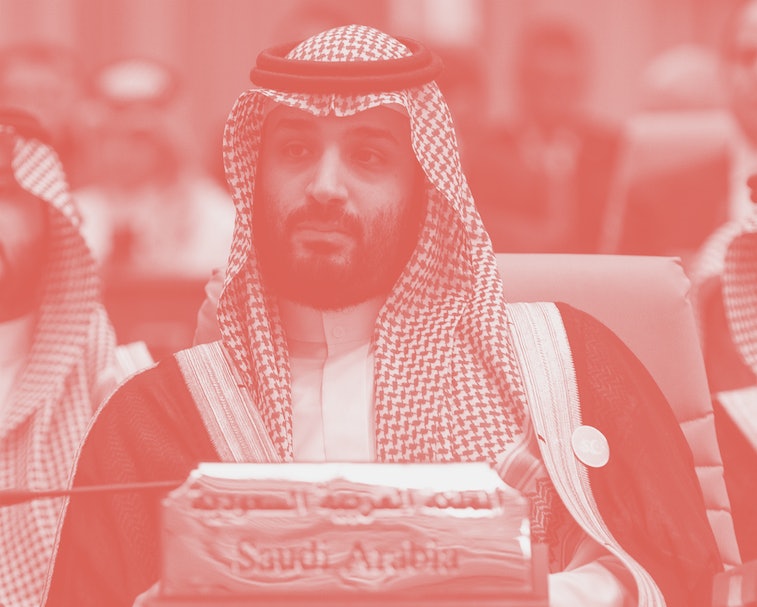 Google's fiber-optic network plans include traversing political borders, but might be able to bridge ideological ones, too. According to the Wall Street Journal, Google's planned Blue Raman project to build a new high-speed internet connection between India Southern Europe — while sidestepping Egypt — will cross both Israel and Saudi Arabia, forcing the sworn enemies into an unexpected detente of sorts, at least when it comes to maintaining their respective stakes in the venture.

The two states have been embroiled in regional controversies over Palestine, Yemen, arms deals, and, well, pretty much every other major political issue in the Middle East for generations. But Google wants to compete with its massive rivals like Amazon, Facebook, and Microsoft to meet local demand for cloud computing, its search engine, data centers, videos, and other services, and won't let regional rivalries stand in the way.

If all goes well, the fiber optic project will run through from India, through Saudi Arabia, Israel, and others, and terminate in Italy. One of the reasons for the planned route is to reduce the dependence on cables passing through Egypt, which levies heavy fees for the privilege, increasing overall costs for all parties involved. The only thing Google needs to ensure is to keep Blue Raman's 5,000 plus mile cable project out of the crosshairs of geopolitics.

It might just work. For several years now, the Saudi crown prince Mohammed bin Salman has shown interest in opening doors to Google's internet project. Here is a photo of bin Salman alongside Google co-founder Sergey Brin in 2018.

The Saudi prince meeting other officials during the same day with Google's Sundar Pichai in the background.

Background — Although the Wall Street Journal describes Saudi Arabia and Israel as civilizational foes, the reality is that both countries have quietly kept relations open. Both states are equally criticized for their regional politics, but in 2015, Israel also offered its highly controversial Iron Dome technology to Saudi Arabia to bolster the latter's border security with and attacks on Yemen. Although the kingdom ultimately refused the Israeli offer, Saudi aggression in Yemen has nonetheless resulted in mass destruction and starvation, which also boasts the approval of the United States Congress.

It would be far more accurate to say that both states maintain an outwardly hostile image to keep their regional allies content, but behind closed doors, their relations are open to cooperation, especially considering the recent diplomacy shown by the United Arab Emirates to "normalize" ties, which is likely to have a huge effect on the region. Moveover, both nations have vested interests in ensuring affordable, high-speed internet connectivity for their citizens, and both are eager to broaden their potential economic drivers, whether that be cutting-edge infrastructure or the sort of startups and other business enterprises said infrastructure enables.

Google is Switzerland — Google will, as it often does, claim neutrality in the matters of border conflicts and regional animus but the truth of the matter is that its Blue Raman project will cross multiple borders, states, and histories. At the moment, Google does not have Saudi's explicit approval to steer Blue Raman through the land, according to sources, but with a sweet enough deal on the table that could change, and fast.