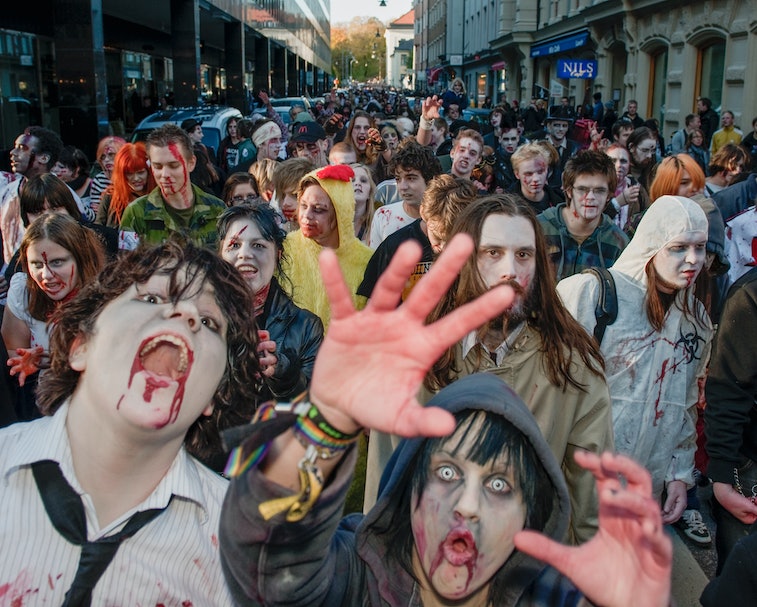 The Pentagon has a bonafide training exercise paper on how to properly combat and subdue a zombie uprising. Yes, we're as surprised about this as you are. Compiled and written back in 2011 by junior officers at the U.S. Strategic Command, the document entitled "Counter-Zombie Dominance," aka CONPLAN 8888, outlines potential governmental responses to various scenarios featuring all manner of zombies, living dead, and reanimated, flesh-craving ghouls.

"This plan was not actually designed as a joke," reads the first sentence of the paper's disclaimer. "...While training augmentees from a local training squadron about the [Joint Operational Planning Process], members of a USSTRATCOM component found out (by accident) that the hyperbole involved in writing a 'zombie survival plan' actually provided a very useful and effective training tool."

"If this plan helps illustrate how JOPP works and brings a smile or brief laugh in the process, so much the better," the disclaimer adds. And it’s true, there are some gems in there, like the meticulous breakdown of various zombie types, including Evil Magic Zombies, Space Zombies, Vegetarian Zombies, and the only real-world zombies, “Chicken Zombies” (yes, they’re real, and horrifying). But, and apologies for being a downer here, some CONPLAN 8888's implications are about as terrifying and in line with its preexisting, cinematic government responses.

Martial law, but just for funsies — For starters, let's call a spade a spade here: CONPLAN 8888 is essentially an outline of the pros, cons, and strategies involved in implementing martial law across the country in the event of an unmitigated environmental disaster. "A smile or brief laugh" may have been possible at one point in our pre-pandemic lives, but as it stands today, all we really see right now is the collective smirk on a bunch of armed military personnel's faces while they toss some more tear gas into crowds of Minneapolis protestors for the sake of restoring "law and order." It's much easier to deploy brutal force during citizen unrest when you can think back on CONPLAN 8888's "Evil Magic Zombies" subcategory and promptly other everyone in front of you.

Nuke first, ask questions later — Also, USSTRATCOM seems really keen on pressing that shiny, red "Nuclear Launch" button. "Although CDRUSSTRATCOM has no geographic AOR [area of responsibility] and has no specified combat roles against zombies, he is the only CCDR [Combatant Commander] in control of nuclear weapons, which are likely to be the most effective weapons against the hordes of the undead."

We're not saying the government doesn't need better contingency plans for the world's worst-case scenarios. Look around you. But trying to meme-ify atrocities really isn't the best way to go about things. Hey, at least we know these mystery drones flying around Colorado aren't a bunch of junior officers horsing around though... or do we?