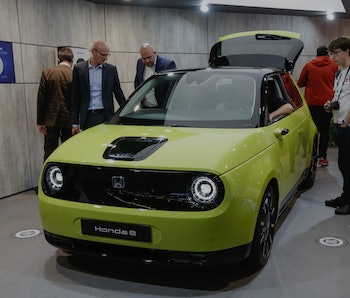 The CEO of Honda's new Canadian division isn't especially enthusiastic about electric vehicles. In an interview with the Windsor Star, Jean Marc Leclerc said that the push towards zero-emission vehicles is politically motivated and that EVs are still too expensive to manufacture.

Leclerc cited studies indicating that Canadians are only willing to pay $700 more for an electric vehicle than they are for an internal combustion one. Based on the investment Honda would have to make to produce them and still sell them at a consumer-pleasing price, "the math doesn't work" to manufacture them profitability, he claims.

This despite the fact that the CEOs of both General Motors and Ford — two companies that have been racing to build their own EV fleets — believe there's plenty of profit to be had from EVs. Oh, and Tesla this week reported $16 million in profit for the first quarter on deliveries of 88,000 cars despite the current global pandemic shutting down the economy and in spite of CEO Elon Musk's antics on Twitter, it remains one of the most valuable automakers on earth.

Moaning from the back — Electrek suggests Leclerc may be so pessimistic about electric vehicles because his company is so far behind the competition in the space. Honda doesn't expect to have any electric cars available in the North American market until 2024, when it plans to release two EVs in collaboration with GM.

The company is being lapped by the likes of Ford, GM, Audi, BMW, and, well, most other manufacturers that are pushing hard on the switch to all-electric offerings, and that all have new hybrids or full EVs going on sale by the end of 2020.

Canada is keen on EVs, though — Canada has set ambitious targets for its switch to zero-emission vehicles, requiring that 10 percent of cars sold in the country be zero-emissions by 2025, and 30 percent by 2030. Leclerc seems worried these requirements will get stricter (emphasis ours):

Nobody wants to talk about how much [EVs] cost and what people are prepared to pay. They’re just forging forward, thinking we have all the solutions, and we don’t.

There’s a political agenda. It’s easy for people to understand zero-emission vehicles as a political statement.

With EVs, you’re basically getting a trickle right now. If you’re looking at saving the planet and having heavier reductions of GHG, the math doesn’t work.

The heavy investments you need to invest to produce EVs, and you’re questioning whether you’ll be able to sell those at a profit. That’s why we’re really concerned about governments putting out more zero-emission mandates that will not really achieve a great deal of GHG reduction in the short term.

Suggesting people don't want EVs or that they won't pay a premium for them seems... debatable. Even if there's some truth in it, once the offerings are wider and infrastructure is more prevalent, we suspect uptake will be enthusiastic. With vehicles like the electric Mustang coming in November, and Hyundai's new offerings slated for next year and 2022, there are plenty of EVs to be excited about. We'd be delighted to add a Honda to the list if it has a change of heart.