“We cannot and will not allow the Chinese Communist Party to exploit network vulnerabilities and compromise our critical communications infrastructure.” 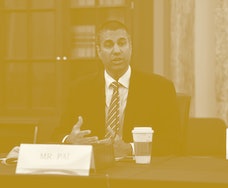 It's official. The Federal Communications Commission (FCC) has formally declared Chinese companies Huawei and ZTE "national security threats" and has barred any use of their equipment in American telecommunications enterprises. That means no more federal funding for the installation of their parts and pieces.

None of this is surprising when you look at the United States federal government's previous pushes against the Chinese giants, including possibly buying Ericsson or Nokia to compete with Huawei's 5G technology or reports that the United States was looking into possibly restricting the role of Huawei in chip-manufacturing. This was eventually going to happen.

What the FCC says — "We cannot and will not allow the Chinese Communist Party to exploit network vulnerabilities and compromise our critical communications infrastructure," FCC chairman Ajit Pai implored in a public statement. According to the agency, both Huawei and ZTE are subject to Chinese law and by that virtue, they could be compromised and used to collect intelligence for foreign authorities.

Hold your horses — Not everyone is as keen as Pai seems to be about barring Huawei and ZTE from the universal service program. Among those to encourage caution — and even a bit of slowing — is FCC commissioner Geoffrey Starks. In a public statement, Starks said that while barring Huawei and ZTE for national security concerns was understandable, there needed to be a modus operandi in place for future steps, including replacing equipment. Of note, two particular passages from Starks stand out. For starters, Starks notes:

Network security is national security. Today’s actions will help secure our networks against new threats from Huawei and ZTE equipment. We must not, however, lose sight of the untrustworthy equipment already in place. Last year, I called for the FCC to find the untrustworthy equipment in our networks, to fix the problem by instituting a replacement program, and to fund the replacement of that equipment. Find it. Fix it. Fund it. The Commission has taken important steps toward identifying the problematic equipment in our systems, but there is much more to do.

The Commission has taken important steps toward identifying the problematic equipment in our systems, but there is much more to do. Funding is the missing piece. Congress recognized in the Secure and Trusted Communications Networks Act that many carriers will need support to transition away from untrustworthy equipment, but it still has not appropriated funding for replacements.

Neither Huawei nor ZTE have publicly responded to the FCC decision but you can expect a retort (like this one from Huawei previously) — and maybe even contingency plan — to be revealed over the next few days.