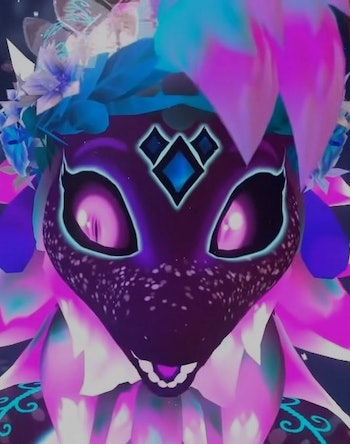 Until the fall, almost no one knew about Hypnotist Sappho. The furry YouTuber, a hypnotist in training, spent her time on VRChat, where she appeared as a sparkly, purple lizard-like creature and offered virtual hypnosis to her peers.

She posted the hour-long sessions to her more than 600 YouTube subscribers, and rarely received more than 1,000 views. But in September, when Sappho posted a video titled “Coming Out About Things,” everything changed.

The influencer appeared in lizard form to make a brazen confession. She was a zoophile: a person who is sexually attracted to animals.

“There are minors completely convinced they’re sexually attracted to animals. They think it’s a legitimate sexuality.”

In the 36-minute clip, Sappho explained her attraction to German shepherds and likened the struggle of zoophiles to the Stonewall movement. She then switched the video to an audio-only format to explain, with the help of another zoophile, why animals can consent to sex with humans. The video has since been viewed over 600,000 times.

Kyle, a 30-year-old furry from California who creates videos to fight predatory behavior in fandom communities, was sent Sappho’s confession by his followers. (Input is withholding the last names of people in this article out of respect for their privacy.) Since then, he’s monitored the growth of her online presence — and it’s horrified him.

Sappho, who until recently was part of the organization ZETA (Zoosexual Engagement for Tolerance and Acceptance), is on a mission to legitimize zoophilia and bestiality. She has built a following of about 5,600 YouTube followers, plus thousands more on her (recently suspended) Twitter account. Furries claim many of these followers are underage.

Kyle is one of many members of the furry fandom — an extremely online subculture that revolves around anthropomorphic animal identities called “fursonas” — concerned about Sappho. They worry that Sappho has sinister intentions for the minors who follow her, a suspicion that she denies.

“I’m not trying to tell people you should have relationships with animals,” Sappho tells Input. “When I talk to those younger people, they already believe they’re zoosexuals.”

Jenny Edwards, a Washington-based zoophilia expert, has seen a dramatic rise in zoophile cases since the advent of the internet — although she notes that zoophiles have existed as long as the Bible, which contains rules against bestiality. “The internet provides perceived anonymity and gives zoophiles a sense of community,” she explains. “They meet each other, make groups, and start to feel comfortable.”

“Furries already have a hard time as it is. We don’t support zoophiles. We hate them.”

Furries, however, are not comfortable with zoophiles, whom they frequently ban from their online and IRL communities. “When zoophilic furries appear and say they have sex with animals, it completely ruins our image,” explains Rusty, a 24-year-old furry and artist from Pennsylvania. “We already have a hard time as it is. We don’t support them. We hate them.”

Meanwhile, zoophiles have built their own community. Members post under Twitter hashtags like #zoophilesarevalid and #zoopride, adorning their profiles with a ζ symbol to advertise their zoosexuality. They use Twitter to network and promote websites, podcasts, and songs devoted to zoophilia.

Sappho, who tells Input she hasn’t yet engaged in bestiality due to legal restraints and having “not found the right partner,” uses Twitter to celebrate the pro-zoophile artwork of her young followers, which usually contain “zoo pride” slogans and Sappho’s fursona avatars. It’s a tradition borrowed from furries, who often create artwork for older artists they find inspirational.

Sappho welcomed these tributes, which she frequently retweeted and praised. Kyle believes her motives are nefarious. “I think that’s probably one way she’s finding people she can target,” he says. “Through the pictures, she knows exactly who to exploit.”

The furry community believes Sappho targets children to fuel her follower count and thinks young people wouldn’t know about zoophilia if Sappho wasn’t around. “She’s trying to imprint her beliefs on impressionable children with that parental persona,” charges Benji, a 21-year-old college student and furry from the East Coast. “She’s very much using it to build her own platform.”

Sappho showers her young followers with love, support, and affection. She even virtually serenaded them at night through Twitter Spaces with titles like “Sleepy Bedtime Story With Momma Sappho” or “Momma Sappho Bedtime Lullaby.” Kyle worries her maternal image is a smokescreen.

“The furry community has a high number of disenfranchised individuals who don’t have the best personal lives,” he says. “If she comes across as nurturing and empathetic, she can easily manipulate their trust.”

Could minors be manipulated into the belief they are zoophilic? Edwards says it’s likely: Zoophilia is extremely rare, but vulnerable teens with little knowledge or exposure to sex could easily confuse healthy curiosity with zoophilia.

“It felt like she was targeting a younger audience. And I was that audience.”

The more urgent matter, in her eyes, is the significant link between pedophilia and zoophilia. “There seems to be a hidden group of animal sex abusers who are really child predators,” she says. Edwards’ research found almost a third of bestiality arrests involved sexual abuse of children under 12. “There’s a high number of people who have sexual interest in both animals and children.”

In this context, the intense devotion of Sappho’s teenage fanbase is disturbing. Countless zoophile profiles, tweets, and fan art — from minors who claim to be as young as 13 in their Twitter bios — credit Sappho as an “inspiration” for their zoophilia. Many refer to Sappho as “Mommy,” and some appear to have committed self-harm in her name. She’s recently been accused of child grooming.

Rusty has spied on Sappho’s interactive Twitter Spaces with minors. Although he says they weren’t overtly sexual, he found the idolization of Sappho unsettling — especially given how many teens referred to Sappho as their mom. “She has a fetish for being called Mommy,” he says. “She encourages kids to call her that.”

One former follower, a 14-year-old from California named Hermosa, tells Input that she and her friends, ages nine and up, joined Sappho’s Twitter Spaces with the intent of leaking information. But they found themselves quickly charmed by Sappho, who convinced them they were zoophilic, too. But after about five weeks, Hermosa says, she changed her mind.

“It all backfired when she would speak to us and preach about protecting the children of the community,” she says. “It felt like she was targeting a younger audience. And I was that audience.”

Another follower, 15-year-old Jake, says he felt that Sappho helped him to feel comfortable with his zoophilia. “The fact she is confident in herself made me feel normal,” says the U.K.-based Jake, who discovered zoophilia when he was 12. Given the internet’s recent response to Sappho, he says he’s reconsidered his stance, labeling himself a recovering zoophile in his Twitter bio. “It’s getting to the point where I’m not trying to be a zoophile anymore,” he says, “because we are in the wrong.”

When Input approached Sappho about the allegations about her behavior, she claimed she is trying to help. “People are outraged because they say I’m promoting bestiality — it’s a lot of the same arguments used against the gay rights movement,” says Sappho, who is cagey about where she lives but reveals to Input that she’s a 21-year-old veteran named Valerie working in computer science. “It’s really important young people have the resources they need and a community where they can feel comfortable.”

Sappho adds that her followers referring to her as Mommy was a reflection of her nurturing nature, although she admitted she’s “attracted to some minors who are 16 and older.”

“I thought there was no way she could be grooming kids, but then she said she was attracted to them.”

After her Input interview, Sappho tried to get ahead of her admission, creating a Twitter thread about her status as a MAP (minor attracted person). It was apparently the last straw: Sappho’s and ZETA’s accounts both were suspended. The confession horrified Jake. “I thought there was no way she could be grooming kids, but then she said she was attracted to them,” he says. “I’m not really a fan of that.”

But furries aren’t ready to celebrate yet. “We may have won the battle, but we certainly haven’t won the war,” says Rusty. He’s worried about Sappho’s latest venture: an invite-only group on the platform Mastodon that encourages teens to label themselves as AAM (adult attracted minor). Some of Sappho’s remaining fans have added that acronym or the phrase “MAP friendly” to their Twitter profiles.

“These kids are in so much danger,” Rusty says, “and they need help.”