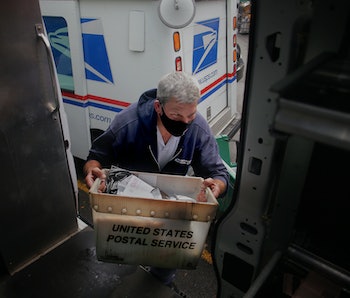 This data is then allegedly handed over to various government agencies. Sensitive information in social media posts, including locations and dates — like March 20 when right-wingers planned to protest COVID-19 vaccines — are then widely distributed to federal agents. USPS says that this monitoring is done to spot potentially dangerous activity. But critics worry that this spying endangers speech and activities protected by the First Amendment. The report comes a few weeks after union organizers accused Amazon of forcing the USPS to set up an illegal mailbox to manipulate a contentious election.

"It’s not at all clear why their mandate would include monitoring of social media that’s unrelated to use of the postal system," Levinson-Waldman said. "If the individuals they’re monitoring are carrying out or planning criminal activity, that should be the purview of the FBI,” she said. “If they’re simply engaging in lawfully protected speech, even if it’s odious or objectionable, then monitoring them on that basis raises serious constitutional concerns."

USPS is keeping quiet — The USPS gave a generic statement to Yahoo! News about the media-monitoring program, noting that it did not discuss these operations and decisions with the public and that the inspection service works in collaboration with other local law enforcement agencies to assess "potential threats" to the agency.

The service's surveillance activities are eerily similar to the Department of Homeland Security's social media monitoring tactics. But while the DHS is officially tasked with evaluating domestic and international threats by analyzing publicly available material, combing through social media content for criminal activity is not within the primary purview of the postal service. Its reluctance to shed light on the matter is even more troubling.

The public could turn — The report is also bound to affect public perception of the agency. Last year, a poll indicated that a whopping 92 percent of those surveyed, including both Democrats and Republicans, strongly supported giving federal aid to the post office during the COVID-19 pandemic. That overwhelming support and solidarity could change if it turns out the USPS was spying on them all this time.