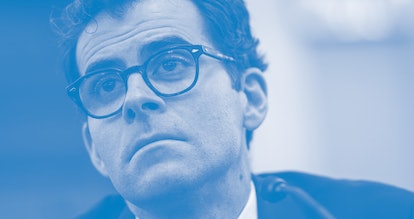 Kylie Jenner and Kim Kardashian both re-posted an image pleading with Instagram to return to its roots on Monday, so Instagram CEO Adam Mosseri quickly recorded a front-facing video addressing their concerns. Mosseri did not name either sister in his two-and-a-half-minute video.

“We’re experimenting with a number of different changes to the app,” Mosseri begins. “And so we’re hearing a lot of concerns from all of you.”

The image shared by both Jenner and Kardashian reads: “Make Instagram Instagram again. (stop trying to be tiktok I just want to see cute photos of my friends.) Sincerely, Everyone.”

Instagram’s rapidly shifting priorities have been a popular topic of complaint for a long time, now, but apparently, those concerns didn’t warrant a response until Kylie Jenner spoke up about them. Then again, the last time Jenner complained about an app, Snapchat almost immediately lost $1.3 billion of market value.

A better experience? — Mosseri addresses three of Instagram’s most significant updates and tests in his video. He explains each with Instagram’s reasoning for making that change.

First up: the full-screen feed being tested for a small percentage of Instagram users. The full-screen experience, meant to mimic TikTok’s scrolling behavior, is, Mosseri says, something Instagram thinks might be “fun and engaging.” He notes that, yes, this experience is “not that good” yet, and that’s why it hasn’t shipped to more users.

Mosseri then addresses a bigger elephant in the room: Instagram’s pivot to video. This he addresses in a more roundabout manner, claiming Instagram is pushing more videos because users want to consume more videos. (We know just how much Mark Zuckerberg loves Reels as a TikTok competitor, so this explanation comes off as somewhat flimsy.)

Strangely enough, Mosseri also gets a little defensive about Instagram continuing to “support” photos — a concern that few, if any, have raised. “I love photos,” he says. “I know a lot of you out there love photos, too.”

Mosseri closes out his video by bringing up Instagram’s “recommendations” module, which he says still needs improvement. He says that ultimately the feature is about helping users discover “new and interesting things” while also helping creators reach a wider audience. If you don’t like them, he says, go ahead and snooze them for 30 days. (There is still no option to turn recommendations off entirely.)

Sniffing out the cash — Underlining much of Mosseri’s video is Meta’s commitment to creators. He says that while the platform is committed to showing you content from friends and family first, it’s also doing all it can to help creators share their content with the world.

Of course, there’s one big reason Mosseri leaves out of his video entirely: money. Meta is committed to supporting creators because that’s where it thinks it can make the most cash. Videos aren’t being prioritized because we prefer videos to photos — they’re being surfaced more often because that’s how Meta thinks it can best steal TikTok’s profits.

Mosseri’s explanations are really just the same excuses Meta has been peddling for years, at this point. Though we can’t speak for Kylie or Kim, he’s done little here to convince us Instagram is heading in a direction that puts its users’ desires first.