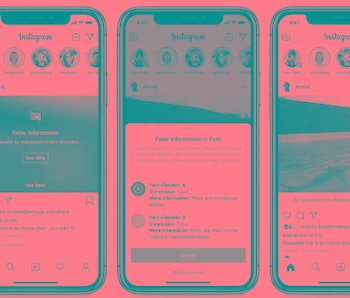 Instagram announced earlier this month that it would begin fact-checking posts to curb the spread of misinformation. The feature has been rolling out slowly since the announcement, and today FirstPost reported it's witnessed it in action on Instagram Stories.

What does it look like? — Instagram has chosen a fairly aggressive look for its fact-checking. Posts marked as factually incorrect are intensely blurred, rendering the post itself almost completely unviewable. Over the post is a message: “Reviewed by independent fact-checkers.” Users are presented with a “See Why” button and, at the bottom of the screen, a “See Post” button.

Instagram says accounts that repeatedly receive these labels will be removed from Explore and hashtag pages. They’re marked using a combination of user-submitted flags and image-matching algorithms.

It’s already a meme — As early as December 18, Instagram accounts began to create and post faked False Information posts. Most of the time these images take posts that have already been flagged as false and then change the text — often to something ridiculous.

For example, one popular post took an image of a tire’s valve stem being trimmed and overlaid the text “Remove the RFID chip by snipping off your foreskin.” Instagram’s image-matching algorithm is easily tricked into believing these posts to be misinformation and tags them accordingly.

This obviously isn’t enough — If Instagram is hoping to actually combat the spread of misinformation, the company will need to do better than this. The feature was available for less than a week before users figured out how to scam the system. A filter so easily tricked isn’t helpful at all — how can users learn to trust Instagram’s version of “true” information when half the time it’s just a meme?