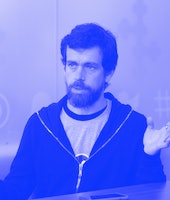 The Twitter CEO's contribution to Mayors for a Guaranteed Income.

Today, Mayors for a Guaranteed Income (MGI) announced their initiative has received a substantial shot in the arm from Jack Dorsey, the CEO of Twitter and Square, who's been ramping up his charitable work of late, in between contending with the ramblings of Twitter's most infamous user. Dorsey's $3 million contribution will be used to help launch guaranteed basic income pilot programs in cities across more than a dozen states, including California, New Jersey, Mississippi, Minnesota, Washington, and Wisconsin.

As the name suggests, MGI wants to try offering select constituents in their cities a basic income — without any strings attached — to see what sort of effect it has. We're talking somewhere in the region of $500 to $1,000 a month. That's not enough to live off. But it may be enough to stave off an unexpected expense like a medical emergency, leave a job with an abusive boss without worrying about ending up on the street, or help keep the wolf from the door while someone starts a small business.

Basic income isn't a new idea — Finland has been testing it for years — but it gained significant airtime in the U.S. over the last year thanks to former presidential hopeful Andrew Wang, who proposed offering a universal basic income (UBI) — which he dubbed a "freedom dividend" — of $1,000 to every American adult.

MGI may have set its sights a little lower, but that's also why its project might just work. Convincing the nation's wealthy elites (other than Dorsey) to give working-class Americans money without forcing them to work in exchange for it was always going to be a tough sell at the scale Yang proposed. But, if it's only a few hundred people in a smattering of cities, the ultrawealthy likely won't even notice.

Setting an example — MGI is spearheaded by Michael D. Tubbs, the youthful mayor of Stockton, California, a city with a Detroit-like riches-to-rags story that's looking for new solutions to alleviate poverty and joblessness in a place where the old myth of meritocracy has been proven demonstrably false. Tubbs has managed to get more than a dozen other mayors to sign up, with the group going public last week, and has a long history of successfully raising funds for philanthropic projects.

Tales of Tubbs' existing work in Stockton found their way to Dorsey, who lent his support after a mutual friend introduced the pair, a spokesperson tells Input. Stockton is committed to conducting another pilot, and will work with other cities in the coalition to design pilots aimed at other vulnerable populations like the housing insecure or homeless.

The funds will be used on Stockton's project and to help the other participating cities plan, research, and launch their own pilots before the end of the year.

It's only controversial if you're rich — Basic income initiatives are mystifying to the wealthy, who wonder why anyone would propose giving money to poor people for free. Surely that only encourages them to continue being poor by removing any incentive to work? For Scandinavians, Europeans from high-tax, comprehensive-welfare states, or anyone who's ever missed a bill and spiraled into debt, or wished they had a little wiggle room each month to pursue their passions, understanding the value of the concept is easy.

MGI is hoping it can generate the necessary data to show that basic income is an enabler that, by many accounts, uplifts impoverished communities and empowers citizens. It may also be one of the only ways to save the U.S. from the deleterious effects of a widening wage gap combined with growing housing costs, anti-immigration policies, and a healthcare system straining because of an inept administration's inadequate response to a global crisis.

Until the pilot programs have run their course and the results have been analyzed, it's too early to say for sure that basic income will have the effect the Mayors hope it will. But they're willing to try, and that's the first step to changing the status quo.