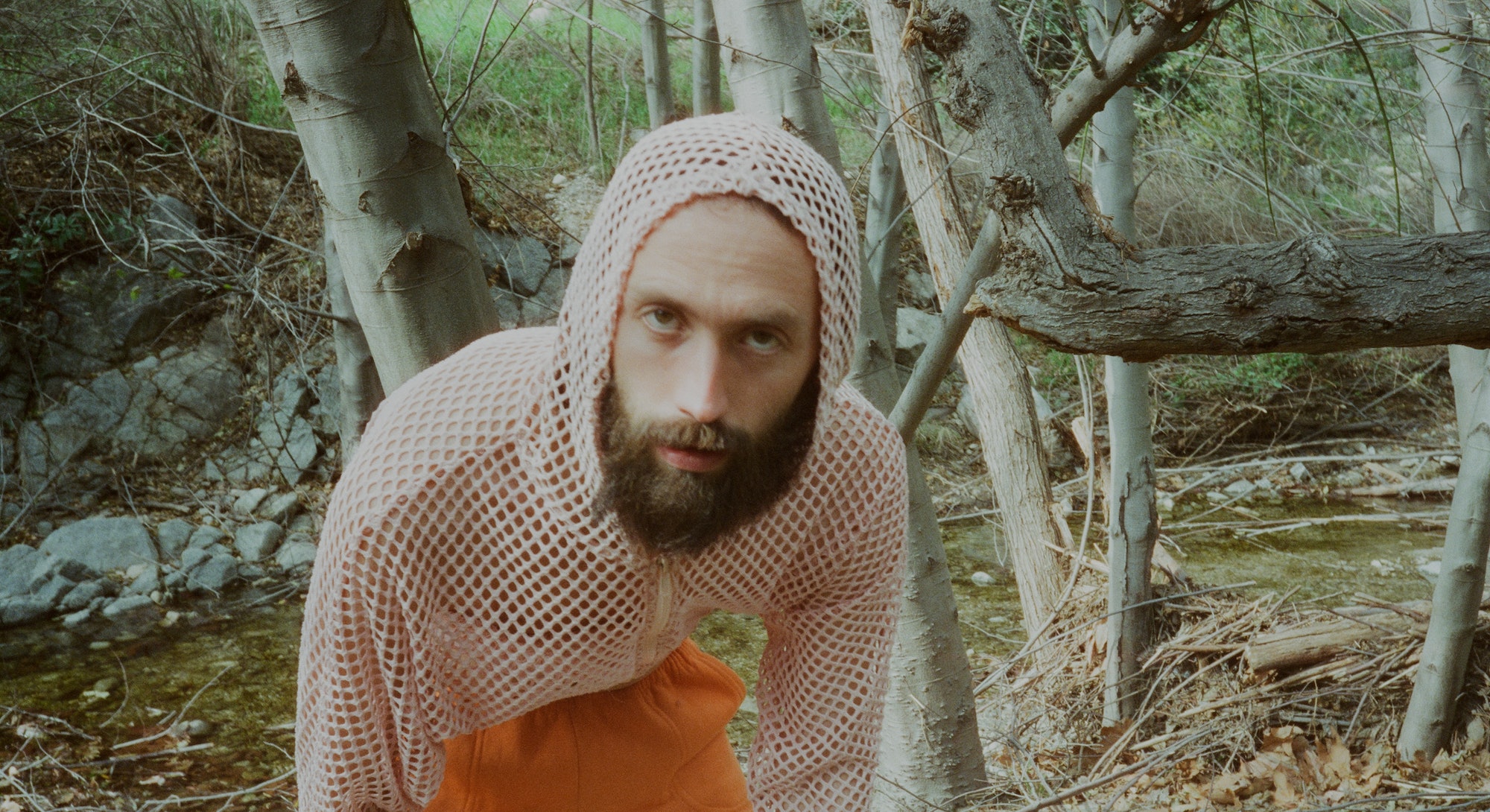 James Krivchenia may be best known as the drummer of Big Thief, but his own musical aspirations go far beyond folk rock. His forthcoming album, for example, is composed almost entirely of YouTube snippets. We’re not talking about Lady Gaga music videos here, either.

You can catch a pretty good sense of Blood Karaoke’s vibe from its album art. A cyberpunk-looking alien of some sort sits in front of a wall of screens, each of which plays a seemingly random video: a teddy bear, a serene landscape, a video game with guns — and some recording equipment, of course. Oh, and a book entitled Emissaries Guide to Worlding.

Krivchenia doesn’t expect this to make all that much sense to you. Or, rather, he’s presenting the picture and wants you to create your own understanding of the album.

Because that’s exactly the project he created for himself with this solo work: making sense of the inexplicable. Blood Karaoke is the culmination of years of watching random YouTube generators, sampling interesting sounds along the way, and weaving them together in an attempt to find something new. He is the alien in this situation, exploring the strange landscape of forgotten YouTube videos and using his discoveries to piece together some semblance of comprehension.

You might think a full-length album made of random YouTube videos would end up sounding, well, random. But Krivchenia has spent years putting this together, and the attention to detail shows. Listening to Blood Karaoke straight through is a cohesive experience. That’s not to say the album doesn’t take surprising turns. It certainly does.

Krivchenia talked with Input about the album’s meticulous production process, staring into the internet abyss, and finding meaning in randomness.

The following interview has been edited and condensed for clarity.

So, to get started, can you walk me through the process you took with this album?

Yeah, it was kind of… a long process. The way I start a lot of stuff is just loosely thinking how things will stitch together with other things conceptually. The first thing I did was just sampling all this weird stuff from YouTube. I was really into these random YouTube generators — I used one a lot called youhole.tv that just plays random YouTube videos with under 100 views. And you can never go back to them.

I’d watch for a couple of hours and record sounds that interested me, with the idea of making something that sounds like YouTube and got really interested in all the different aesthetics. Then I became obsessed with downloading MIDI of random things. And I just started tinkering, manipulating it and building these little things. I tried not to get caught up in like oh, I’m making an album. I just thought about what kind of music I wanted to hear and that’s how it became this sort of hyperthymic dance mix thing.

And how long ago was it that you started sampling?

That was probably like three years ago. Not long after I finished A New Found Relaxation. It takes a while. I have a lot of these different streams that interest me, sound spaces I’m exploring that aren’t necessarily about a record. It’s like I’m just collecting something.

I was really impressed by just how cohesive the new album sounds. How did you go about stitching everything together?

Yeah, it turned into a big thing. One of the things I find most powerful about digital audio workstations as opposed to older ways of recording is there’s this amazing ability to edit infinitely, which can be a curse for a lot of music. People don’t trust their imperfections. But there’s this creative side of it, where you can really get meticulous and zoomed in on something and end up making this thing that’s faster than perception, faster than you could perform.

There’s a certain feeling to it. That’s hard to do in real-time because you’re moving at a normal human pace with the normal phrasing that we’re used to. I enjoyed getting something out of the computer that felt special to the computer. So yeah, I just had fun with these super-detailed little things and realizing these two sounds fit together — it’s just a different way of creating. It was complex, yeah, but really fun.

Did you end up downloading any of the videos you sampled?

No, I just recorded the audio. There’s another side to this completely, which is the visual stuff, the actual content of these videos. It’s fascinating because it’s so mundane. Occasionally something appears that’s so unexpected. You watch it for an hour and see 30 different languages spoken. It makes you feel small in a good way. Half is like kids talking to each other while they’re playing video games. It’s a slice of life.

Right, and the YouTube so many of us know is served up to us by YouTube’s algorithms. Using these videos no one would ever know about gives a different feel to the project. Were there any types of videos you felt particularly drawn to?

I knew early on I wanted to steer clear of too much human talking. With this sort of scraping technique, there are some ethical thresholds you feel yourself encroaching on. Something about sampling human speech felt weird, especially in foreign languages. I tried to stay away from anything super noticeable like popular songs. There was very little context. It feels a little like you’re playing with magic when you don’t actually know what you’re doing, like you might be casting spells that are bigger than the capacity you have.

It became a gut thing, that was most important. I was listening for interesting textures, there are so many you couldn’t get with plugins because it’s just people uploading with bad sample rates. There’s a very specific texture to the microphones on cameras and ways of capturing audio that aren’t in a studio.

If you had to guess, how long did you spend sampling before you started figuring out what to include in the album?

Oh, geez, a long time. Dozens of hours for sure.

Would you say the final product could be described as a “YouTube album”?

It definitely became more through the process. I didn’t really know the feel of it until I made a rough edit towards the end and then listened to it. Before that, it was just all these separate things that’ll probably sound crazy put together. And then it’s like yeah, it does sound crazy.

It’s funny how I can hear my taste in it a lot. In feel and rhythm and harmony. Close friends heard it too, like oh, that’s very James. That became a lot of it, which is good. Otherwise, it’s just sad and esoteric.

Did you learn anything about specific parts of your taste or general aesthetic through the project?

I found I really enjoyed putting it all together, especially the transitional elements. I can see it in all my projects now. Or, like, the way the song starts is important to me — does it feel awesome immediately? There’s this basis of flow in my work, making everything work with the flow and not against it. There’s this human presence behind whether or not it’ll resonate in that way.

Is there anything you learned with this project that you want to bring back to your production work with groups like Big Thief?

Oh, definitely. I’m sure there’s stuff I don’t even know that I’m bringing from this process. Doing Big Thief is like the opposite of a hyper-edited band. We have a love for the first take. We want to play together because it sounds better. Hiding behind production does no one a favor. It’s a challenging way to record because there are no excuses.

But doing this project showed me I can use this editing flow state where you don’t really know where you’re going for a more straightforward record too. Where I can not think at all about performing or correct arrangement or something, just having fun and doing weird shit. It’s this sort of superhuman wildness that you couldn’t possibly do if you were trying to nail a tape. You get these weird results because it’s improvising, but it’s reigned-in in a way that’s strange and cool.

This may be a loaded question, but would you say all the time you put into this was worth it?

Oh, yeah. For sure. You find big growth musically just seeing something an idea through. No matter how it comes out it’s like alright, I got my hands dirty, now I know what I want to do more clearly. I’ve never really felt something completely bombed. It still helps you in some way. It’s kind of nice knowing some things don’t need to see daylight.

Before you go, can you talk me through this album artwork? Because it’s really incredible.

My good friend Peter Nickels made it. I sent him the record in an almost-done state, and I knew the music was up his alley. I knew it would be 3D-ish because he’s working in that medium a lot right now. An image I kept coming back to — whenever I was lost in terms of perspective for how to proceed musically — as a grounding thing I kept imagining I was an alien scanning, trying to make something that makes sense. It’s an attempt at logic. So he jumped off from that. So yeah, the alien in yourself is scanning this crazy world and trying to make sense of it. And it doesn’t make sense, you can’t possibly make sense of it, but that’s the attempt.

I think that was part of the emotional impetus for the album. The fact that I can even see these videos and get the slightest superficial sense of vastness is unfathomable. And it’s trying to make sense of that feeling, to make peace with it.