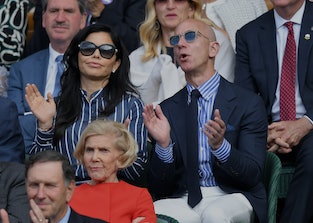 How much more Bezos is worth thanks to the pandemic.

This universe’s Lex Luthor is doing great. In case you were worried about the world’s wealthiest man and how he's faring in the first pandemic of the 21st century, Jeff Bezos' bottom line is up by $24 billion, according to The Guardian. Despite an initial wobble where Bezos dumped some shares, Amazon’s stock has rallied as quarantined people turn to the e-commerce giant for, well, everything. This news comes as the company tries to squash unionizing efforts and scrambles to hire more workers in unsafe conditions.

Business is booming — Bezos’s net worth is up 20 percent over the last four months, setting it at $138 billion. On Tuesday, Amazon stock prices reached an all-time high as the business runs at the sorts of levels usually only seen around the holidays. The surge is likely bolstering the company’s resolve to delay Prime Day — which outperforms the holiday season — by at least a whole month. Which is truly an emblem of capitalistic restraint amid an unprecedented public health crisis.

What about the workers? — Those who work in and with Amazon's warehouses haven’t been as financially prosperous lately. Third-party sellers can’t move in-warehouse products or ship items even if they could do so faster than Amazon. Meanwhile, in a move that rubs salt in already gaping wounds, Amazon — worth $1 trillion — asked for public support in fundraising for its drivers.

Warehouse workers face dismissal and slander for attempting to unionize while Amazon drags its feet on improving COVID-19-related sick leave policies. Even if they’re not organizing, workers can be fired for not following social distancing guidelines, which are often difficult to adhere to. To meet demand and offset the absence of sick workers, the company is on a hiring spree... but there it isn’t following safety guidelines either.

The company's workers are, however, currently enjoying a temporary $2 an hour raise. Meanwhile, Jeff Bezos is worth $24 billion more on the back of their efforts. Isn't rampant and rapacious capitalism just wild?