Jeff Bezos' pocket rocket is 10 inches long, reusable, and made for beginners 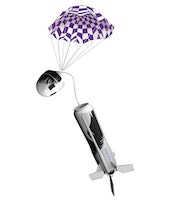 We don’t know if you recall, but last month Jeff Bezos visited outer space aboard his dickmobile. Although only up there for fewer than 11-minutes, he promised the view from his private penis rocket’s window had a profound effect on him, one that apparently boiled down to “Let’s move my planet-killing empire’s illegal parts outside Earth’s jurisdiction.” Now he’s suing NASA because it didn’t like his crummy lunar landing vehicle proposal, throwing off the entire timeline of humanity’s return to the moon.

Anyway, you can pre-order $69 for a 1/66th-scale model from Estes of the prick’s prick-shaped space vehicle. Scheduled to release on November 1, it’s roughly 10-inches long, 1.8-inches wide, can be used over and over again, and is advertised as perfect for “beginner” level hobbyists. Do with this information what you will...

And by that we mean take extremely lewd photos using it and then send them to Jeff Bezos as a goof.

Takes just 10 minutes to completion — According to Estes’ product description page, its New Shepard miniature is a pretty simple DIY project, taking only 10 minutes to complete. Enthusiasts can launch the rocket roughly 400-feet into the air, which sounds pretty cool. Its parachute ensures a soft landing for reuse, as is the case with most of these kinds of toys. Still, there’s no avoiding the fact that it, unfortunately (but as advertised), looks very much like Blue Origin’s New Shepard rocket, which is to say, it looks like a big ol’ beefy boy part.

Please feel free to enjoy rockets, just not this one — As The Verge notes, there is absolutely nothing wrong with model rocketry as a fun and relaxing hobby. We wish we had more time to try it out, honestly. But please, for the love of God, purchase literally any other model from Estes other than the $69 Jeff Bezos edition. Shoutout to the marketers who chose the price point, because we absolutely refuse to believe they were not in on the joke of making something resembling that, reference that.

Here, try this one out that’s based on NASA’s SLS rocket. It’s also priced at $69, but that’s probably just a coincidence. Probably. There’s also some really cheap starter options for about $20, too, if you are looking for rocketing on a budget. Enjoy.

More like this
Will Gendron
6.14.2022 7:18 PM
Culture
Rogue beaver guts Canadian town’s internet after gnawing through a tree
Matt Wille
6.13.2022 4:07 PM
Culture
William Shatner's Blue Origin flight sent him weeping for the environment
Will Gendron
6.22.2022 10:15 PM
Brain Power
They did surgery on a locust's brain for cancer research