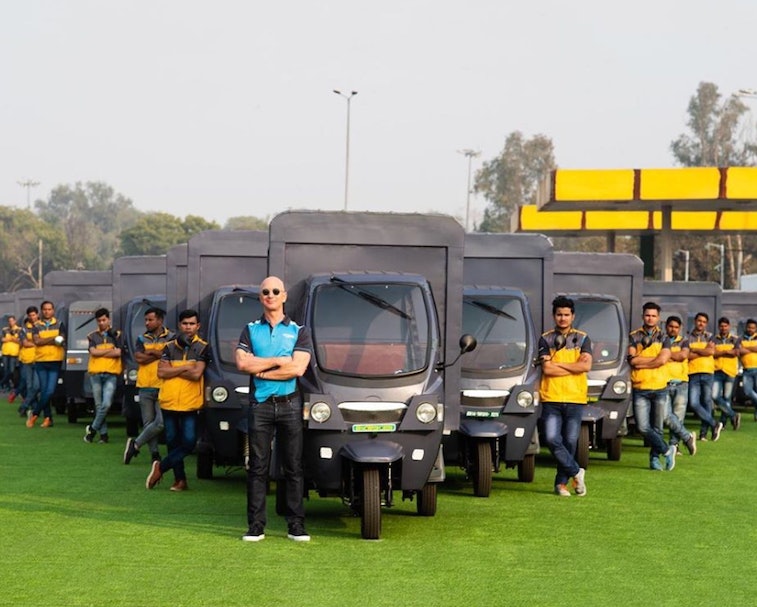 Jeff Bezos, professional stuntman, just released a video to show off Amazon’s fleet of electric rickshaws. The vehicles are rolling out in India for Amazon deliveries; the company expects to deploy 10,000 of them by 2025. It’s the latest in Bezos’ misguided attempt at wooing the Indian marketplace.

The video is cheeky and mostly meaningless — A laughing Bezos pilots the lead rickshaw in a fleet of serious-faced delivery drivers as they drive around a perfectly manicured field. The vehicles eventually circle around to form the Amazon arrow logo. The video gives no details about the rickshaws. Its message seems to be: “These are fun!”

This is part of Bezos’ 'surprise' visit to India — Last week, Bezos showed up unannounced at an Amazon event in Dehli, where he announced that the company would invest $1 billion in India over the next five years. The money is meant to be invested in local small businesses to bring them into the digital age.

Attendees didn’t seem as pleased as Bezos would have hoped. The event’s keynote speaker was forced to cut his remarks down to just five minutes. “I am not used to such delays,” he said.

The Indian government wasn’t pleased, either — Bezos didn’t schedule any sort of meetings with the government while he was there, though prime minister Narendra Modi apparently refused to meet up with him. India’s antitrust regulator even opened an official investigation into Amazon’s practices in India. Local retailers protested the visit with signs like “Amazon go back.”

Amazon's future in India is murky at best. Bezos will need to find common ground with locals and the Indian government — rather than riding in unannounced in an electric rickshaw — to have a future there at all.