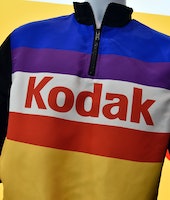 The quantum of the loan Kodak received under the Defense Production Act.

In a move to ease the United States' dependence on foreign drug manufacturers from India and China, camera-, film-, and puzzle-maker Kodak is entering the drug production business, The Wall Street Journal reports. The massive pivot — from a company whose failure to capitalize on the digital camera market is now the stuff of business school lore — is being made possible by a whopping $765 million loan from the Defense Production Act.

The purpose of the loan is to help Kodak produce generic drugs in the United States, including the antimalarial drug hydroxychloroquine. Yes, that hydroxychloroquine associated with Donald Trump's false claims that it can cure the coronavirus. It's also intended to get Kodak making some of the key constituent ingredients needed to make other pharmaceuticals.

Kodak plans to expand drug business — Kodak's chief executive, Jim Continenza, touted the move as a significant and critical business venture for Kodak, adding that the drug production branch could eventually make up at least 30 to 40 percent of its corporate and manufacturing operations. The chief executive told The Wall Street Journal that the production would include "starter materials" as well as " active pharmaceutical ingredients."

Drug production is an expensive endeavor, but Continenza sounds confident about Kodak's future. Given the existing corporate and production infrastructure it already has, Kodak will be "up and running quickly," he says. That giant loan with a 25-year repayment plan no doubt helps ease the stress such an enormous venture would usually come with.

The political push — The repatriation of the American drug production chain is a hot topic on Capitol Hill. Earlier this month, Donald Trump's administration endowed the Phlow corporation with a $354 million contract to produce generic drugs. According to The Washington Post, Peter Navarro, White House adviser, said at the time that the decision had "all of the elements of the Trump strategy" and was designed to give Americans high-quality jobs in order to fight the "pollution havens, sweatshops, and tax havens of the world."

It's also no secret Trump wants to do whatever he can to reduce American reliance on Chinese companies. And given the constraints on the international supply chain events like the coronavirus pandemic can have, arguing that being less reliant on it for essential medications is hard to argue with.

Could this work? — Unlike foreign drug companies, Kodak will have to operate with the Food and Drug Administration's (FDA) oversight, and by doing so, it could potentially improve the quality of generic drugs. Of course, this is all hypothetical at the moment. The company faces massive competition from China, India and other markets that the U.S. has spent the last 30 years gradually outsourcing its pharmaceutical manufacturing too. Kodak's only just gotten the money. It may be years before U.S. consumers reap any benefits from it.