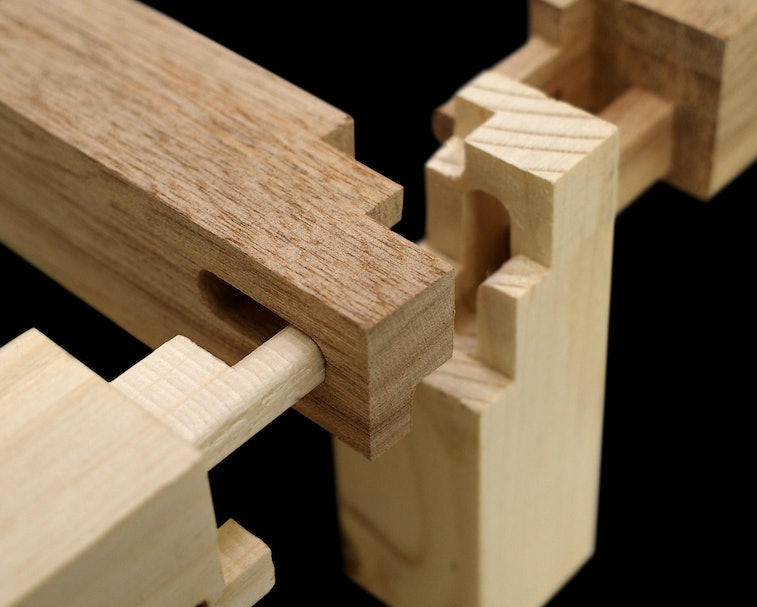 Japanese joinery, known as “tsugite,” is a traditional building technique used for shrines, houses, and furniture that involves zero nuts and bolts. Software researchers Maria Larsson, Hironori Yoshida, Nobuyuki Umetani, and Takeo Igarashi at the University of Tokyo have developed software that allows anyone to take a step-by-step look at how tsugite can be used to create stools, chairs, tables, and more.

The software is, fittingly, called “Tsugite,” and its creators describe it as a "computational system to design wooden joinery that can be fabricated using a three-axis CNC milling machine." CNC is "computer numerical control" which is used in automated machining.

The Tsugite software gives users a comprehensive explanation of the potential for friction, loose ends, and other key pointers for successful joinery. The researchers call the program an "interactive system for designing and fabricating wood joints," and presented their software at a symposium in late 2020. You can download Tsugite software off of Github.

The YouTube video of Tsugite software above shows how a user can move several blocks of wood around on a screen and see which angles would work more effectively. All you need to do is move your pointer to experiment with intersections, dimensions, and even the thickness of wood planks. The software uses different colors like red, purple, brown, yellow, and textured patterns like criss-cross sketches to denote bridging, interlocking, milling direction, constraint points, and loose parts.

Breathing life into an old tradition — As Open Culture explains, Tsugite has been an ongoing craft in Japan for over a millennium. Those trained in this intricate art already have a profound grasp and intuition for their work that they learned over years of trial and error.

But for those curious about tsugite and without years to learn its finer points, the graphical feedback from Tsugite can give them a crash course. The software is especially good for giving newcomers an idea about areas of their designs where there’s room for improvement by pointing out data about a block's slidability, notes about potential problem areas involving orientation and angles, information about whether or not a block might break under too much pressure, and more reliable connection points.

We’re not saying you’ll learn to build a patio table right away, and you’ll still need a CNC machine and some timber handy if you actually want to, but there’s much pleasure to be had from experimenting with a cathartic Japanese tradition that’s beautiful in its elegance and simplicity.