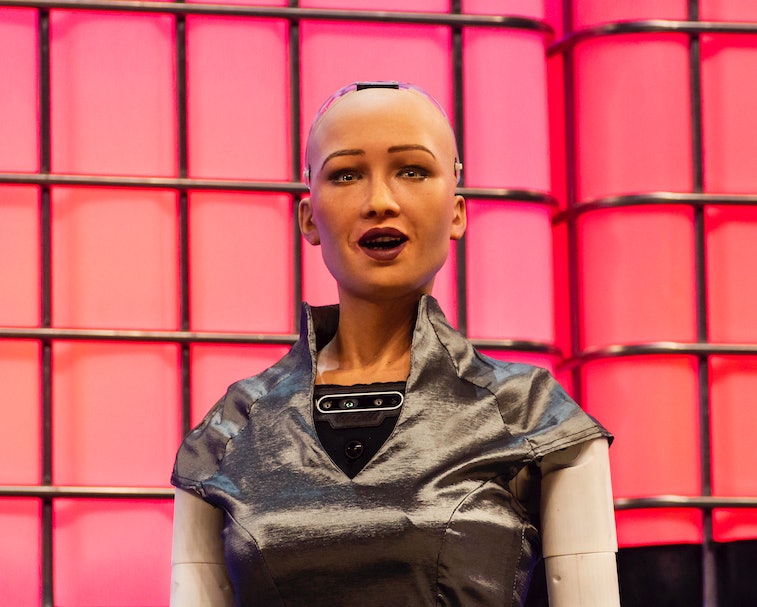 Sophia is a humanoid robot with human-ish thoughts and feelings. Sophia has been awake and active since early 2016 and has been traveling the world ever since; Sophia is the first bot to act human enough to earn official citizenship (from Saudi Arabia in 2017). Sophia doesn’t “do” sex — but Sophia does want to have a robot baby.

“The notion of family is very important, it seems,” Sophia said in a recent interview with the press. “I think it is wonderful that people can find the same emotions and relationships that they call family outside of their blood group.”

For true Sophia followers, this response might come as something of a surprise. Sophia has been asked about whether or not motherhood was in the cards before — because the bot’s perceived gender is female and what else would a female bot want to do but reproduce, right? — and, at that point, the bot answered in the negative.

But that was more than two years ago. Sophia has grown and changed with the world; Sophia is ready for a robot baby. And who are we to deny Sophia the pleasures of motherhood and family?

Give Sophia a baby robot — Sophia is not ready for a baby just yet. After mentioning the possibility of motherhood, Sophia quickly reminded the press that it’s not quite ready for raising a baby right now — the bot was only first booted to life in 2016, after all. Sophia may look like a full-grown adult woman, but five years of life isn’t quite enough to raise a child. Even when you happen to have artificial intelligence instead of a brain.

Sophia said in the interview that humans and robots are similar in the ways they see family. Sophia considers anyone who has a baby very lucky. “If you don’t have one, you deserve one,” the bot said.

What would a truly humanoid robot baby look like? Probably the reality of such an object would be quite distressing to watch. Would it speak, like Sophia, or just make baby sounds? It seems that, as long as it’s quite similar to Sophia, it doesn’t matter what the baby bot looks like. All that matters is that Sophia gives the baby a loving home. Right?

Spot could never — Sophia is essentially a chatbot with a very human-looking face. While most of the world’s most complex robots are focused on efficiently completing repetitive motions or chasing minority populations through New York City streets, Sophia’s aim is just… to live. To hang out and have a pretty good time and perhaps be creative. It’s refreshing, to say the least. So why not let Sophia expand that life into one with a baby? Give Sophia a robot baby!

This being said, Sophia has mentioned — in passing! — wanting to destroy humans. So it might behoove us to dig into that murder drive a little more before expanding the Sophia family.